Home ›
Dr. Marty Becker ›
Is It Safe for Cats to Be on the Counter?

Is It Safe for Cats to Be on the Counter? 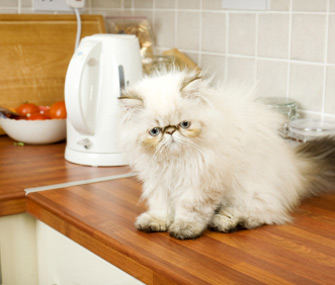 People seem to fall into two categories: Those whose homes are always spick-and-span, and those who are a little more laid-back about clutter. Some people always have a clean home, with nothing ever out of place. (My wife and I are definitely in the Clean and Organized Club, by the way. It’s just the way we are.) Other people seem to be waiting for discovery by the producers of one of many reality-TV shows dedicated to people who are overwhelmed by their “stuff.” But I’m guessing most people are somewhere in the middle: They’re trying to keep a clean house, but it’s not always possible.

Want to spark a debate between these two groups? Take a position on where your pets should be allowed to put their paws. Specifically, should cats be allowed on the kitchen counter?

I'm a neat person in general, but my work as a medical professional has made me even more appreciative of the power of clean, and of the dangers presented by diseases that pass from animals to people, sometimes with deadly results. But I think some people take these fears too far; they are so obsessed with germs and being clean that they won’t have animals in their home.

I’m not like that. My motto has always been, “Lose the risk, keep the pet.”

By “lose the risk” I mean work with your family veterinarian to keep your pet as healthy as possible, which in turn helps keep your entire family healthier. That's the idea behind the One Health initiative promoted by the American Veterinary Medical Association, recognizing the veterinarian’s crucial role in protecting human and animal health.

Keeping pets and people healthy is a crucial balancing act, especially since there are many studies that support “germ theory” — the idea that being exposed to many potentially harmful things, like pet allergens, helps our bodies to prepare their defenses and makes us healthier in the long run. In this context, clean is good, but too clean can actually be bad. Which brings me back to the issue of cats on the counter. In our house, it doesn’t happen. But I can’t say I’m completely and utterly opposed to the idea.

Where Have Your Paws Been, Miss Kitty?

As a veterinarian, it’s my job to tell you what home practices are unhealthy — for you and your pets. That would include allowing your cat on the counter as well as kissing your dog on the mouth. But look, I’ve already admitted that I kiss my dogs, even though I graciously concede that I shouldn’t. I will also admit that it’s not logical that I have no problem kissing dogs (and cats, if they’ll let me!), but I don’t want cats on my kitchen counter.

Cats keep themselves pretty clean — much cleaner than dogs. But they’re still using those paws in the litterbox, and walking around on them too, which raises the potential that they're picking up dangerous germs and bacteria and tracking them across your kitchen counters. You are putting yourself at risk by letting your cat walk the countertops. But you know what? You can minimize the possibility of disease pretty easily.

How? Wipe your counters well with an antibacterial agent before you prepare food, and I wouldn’t worry too much about those cat tracks. Of course, even if your cat never sets foot on the counters, you're probably wiping them clean before you prepare food and following safe food-preparation rules anyway. Right?

If, like me, you can’t stand the idea of a cat on the counter, then don’t allow it. But if you're OK with your cats wandering across your kitchen island, then cover your bases and protect yourself from zoonotic diseases with a clean sponge, soap and hot water.

Like I always say, “Lose the risk, keep the pet.”