Is It Safe to Give a Dog Beer? 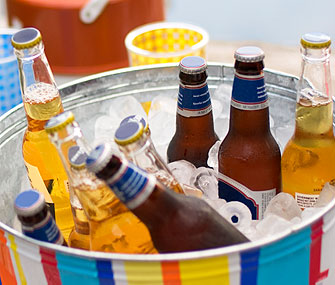 Q. My boyfriend thinks it’s hilarious to give his dog beer. I’m pretty sure this is a bad idea. Who is right?

A. You are. Alcoholic beverages are toxic to pets — and, of course, to people, too.

Check out what could happen to the dog who gets an overdose: vomiting, diarrhea, decreased coordination, central nervous system depression, difficulty breathing, tremors, abnormal blood acidity, coma and death. Those are the symptoms the ASPCA’s Animal Poison Control Center warns of for pets. But doesn’t it also sound like the tragic details of a news story in the aftermath of a college hazing incident?

And remember: The toxicity of alcohol is heavily dependent on body weight — and pets weigh a lot less than people do, which means that it takes a lot less alcohol to make them dangerously sick.

Beer, wine and other products with alcohol are called “adult beverages” for a reason. Your boyfriend needs to grow up and behave responsibly with regard to their use. That can start with not sharing beer with his dog. It won’t be funny when he has to deal with a bill from the emergency veterinary clinic — or a dead dog.

And by the way, marijuana is off-limits, too, as are a variety of other substances.