Summer Safety: Protect Your Dog From These Common Water Hazards 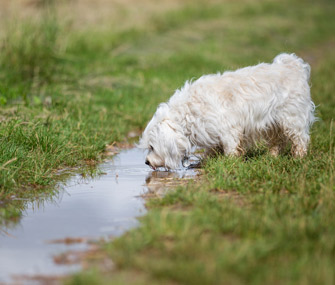 Thinkstock
Don't let your dog drink from streams or other water sources where animals may have pooped — he can be infected with Giardia or other dangerous parasites or bacteria.

Many dogs seem to love water the way I love a good peanut butter and jelly sandwich. During warmer months, I see them swimming in pools, splashing in lakes, hanging 20 on surfboards, and they always seem to be living it up.

There’s nothing wrong with that — in fact, water play is a wonderful way for dogs to stay cool in summer and wear themselves out at the same time — but bodies of water can hold hazards that might not be visible to the naked eye. Here’s what you should know about keeping your dog safe while he’s in the swim of things.

One water-borne risk is from Giardia, a microscopic protozoal parasite that infects the intestines when a dog ingests cysts (infectious offspring) shed in another animal’s feces. Often, dogs become infected through drinking contaminated water. Giardia is one of the most common intestinal infections we see in dogs (and cats).

Infected dogs may show no signs, but it’s not uncommon for dogs with Giardia — the condition is known as giardiasis — to get diarrhea, or “the squirts,” as it’s sometimes nicknamed. Other possible signs of giardiasis include vomiting, weight loss or lethargy (lack of energy).

Puppies are especially at risk, but older dogs can become infected as well. The best way to help prevent giardiasis is to ensure that your dog doesn’t drink potentially contaminated water, such as that from streams or other water sources where animals may have pooped. If you’re hiking or camping, carry fresh water for him, or filter or boil water before giving it to him. And just so you know, humans can also get Giardia, but they rarely get it from dogs.

Blue-green algae (cyanobacteria) is a toxic bacterial stew that can cause upper respiratory problems, affect the liver and neurological system, or even kill your dog if he drinks it. Found on lakes with poor water quality, the blue-green algal blooms can resemble green paint, pea soup, or thick blue or green foam. The water may stink or look scummy. Dogs can ingest the bacteria when they drink lake water or lick themselves after swimming in contaminated water. Keep your dog out of the water if you suspect a harmful algal bloom (HAB) and rinse him thoroughly with fresh water if he hops in before you realize there’s a problem.

Cyanobacteria are most common in mid to late summer, when water temperatures are likely to be high, but they can also occur in relatively cool water, too. Some cyanobacterial toxins can remain in water for days or weeks after the algal bloom disappears, so limit your dog’s lake outings for a while if you know a bloom has occurred.