The Truth About Dogs and 'Pee Mail' 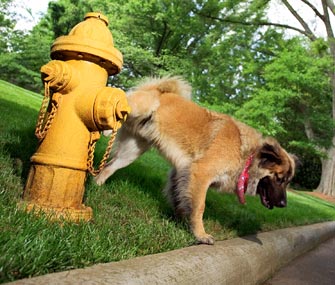 If you’re like me — well, heck, like most of us these days — one of the first things you do every day is check in online. Your dog's version of this is something I call “pee mail,” and it’s just as important a means of communication for our canine companions as our digital check-ins are for us. How much do you know about pee mail? While we can never get as much information from it as our dogs can with just a single whiff, you can still learn a great deal about your dog — and all dogs. I’ve collected some fun facts about this important canine ritual for you!

Have you ever watched the effort a tiny dog will put forth to make his mark more substantial than any other’s? It can be dramatic. I've known many little dogs who have an almost acrobatic ability to stand on their front legs and adjust their rear ones to squirt as high as any Great Dane can. They put the high-hitching leg-lifters to shame! These dogs are trying to "overmark" the scent of other dogs, and they won't let short legs stop them. Don’t tell a little dog that he can’t do what a big dog does! He’ll work extra hard to prove you wrong every time.

But what is your dog finding out when he sniffs where other dogs have marked? There is a lot of information to gather, and it’s all very interesting to your dog. By checking the pee mail, a dog can determine the gender of the dogs who came before him and whether they’re spayed or neutered. If there’s a female in heat, he’ll know that, too. He can also determine the health and stress level of the dogs who’ve been by, as well as a dog's social status.

Until fairly recently, we didn’t know that much about pee mail, aside from general observations. For example, most people believed that caring about another dog’s pee was something male dogs did but females did not. Turns out we weren't paying close enough attention: According to a study by Dr. Anneke Lisberg, intact males with high social order are most likely to overmark, or pee over another dog’s scent, while females tend to mark nearby, as opposed to on top of, the urine mark left by another dog. Dr. Lisberg's work also suggests that female dogs are interested in both male and female pee mail, while male dogs are primarily interested in what other male dogs lifted on. For all dogs, unfamiliar urine got more attention than familiar urine, and that’s not really surprising: A stranger who walks onto your property will get more scrutiny than someone you recognize, after all, like a friend or relative.

Perhaps not surprisingly, dogs who are low on the pecking order sniff but don’t pee over another dog's mark as often. It may be that those dogs are looking to identify a threat but aren’t interested in waving their urinary capes in front of the neighborhood bully.