What Is Happy Tail Syndrome? 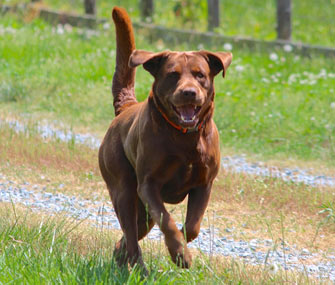 Does your dog wag his tail so hard in greeting or excitement that he bashes it against doors, walls, fences or the sides of a kennel until it’s bloody? He’s not alone. It’s not unusual for large dogs with smooth, thin tails — think Labrador Retrievers, Great Danes, Greyhounds and Pit Bulls — to injure their wildly wagging appendages in this way.

In my practice, I’ve seen many dogs, mostly Retrievers, with this condition. They wag their tails so vigorously that they lift alternate back legs off the ground! We veterinarians have a nickname for this condition: happy tail syndrome.

When owners come in with a dog whose tail has a bloody tip, I say, “Your dog smiles too much.” They look at me quizzically, and I explain that dogs “smile” with their tails, adding, “Your dog smiles more than a Walmart greeter or an NFL cheerleader.”

A dog’s tail has anywhere from five to 20 vertebrae, known as “caudal” vertebrae, because they are positioned toward the rear of the body. Some dogs have long tails covered with short hair or thin skin. In addition, the tail has a good supply of blood vessels.

All of these anatomical de-tails, if you will, contribute to the possibility of happy tail. When you add in the dog's large size, the force at which these pooches can wag their tails can cause serious damage to the tip of that thin-skinned tail when it hits a hard surface multiple times or over a long period.

The skin at or near the tip of the tail gets abraded so much so that it starts to bleed. Smaller dogs or those with short or extra-furry tails are less likely to suffer this type of injury.

When you have a dog like this, you may come home to what looks like a murder scene with blood spattered all over the area where the dog has been wagging his tail. If this occurs multiple times, the dog can develop a bleeding ulcer on the tip of the tail.