What Is Normal Dog Temperature, Heart Rate and Respiration? 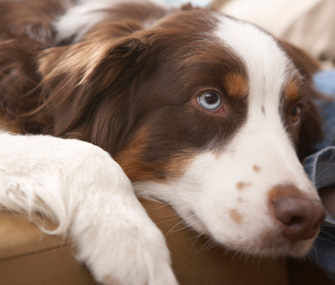 Thinkstock
Dogs at rest have a normal respiration rate of 10 to 35 breaths per minute. Practice checking your dog’s respiration rate at home, when you and your dog are both relaxed, so you’ll recognize quickly when something is wrong.

I always tell folks to watch and listen to their pets every day. You learn to see patterns in their behavior: how much they eat and drink; how much they sleep and when and where; how they breathe, at rest and after exertion. All of those things are clues to your animal’s health. The best way to recognize when something is abnormal is to be familiar with what’s normal. If you’ve got a hot dog or a heavy breather, here are some guidelines to help you determine if your pet is healthy or having problems.

Breathing is something we almost don’t notice, in ourselves or our dogs. The body regulates breathing automatically, sending signals from the base of the brain down the spine to the muscles that control breathing, telling them to contract and relax on a regular basis. Breathing changes based on factors such as activity level, temperature, the presence of irritants or toxins in the air and emotions such as fear or anxiety.

When a dog’s respiratory rate is persistently high and can’t be attributed to any of the above environmental factors, it can signal a health problem such as anemia, congestive heart failure or various respiratory disorders.

Shallow or slow breathing is also a concern. A dog whose respiratory rate has decreased markedly may be in shock. He could be in danger of not breathing altogether. This can be a result of a number of factors, including trauma (such as being hit by a car), poisoning or certain neuromuscular diseases.

Other signs of respiratory problems to be aware of are noisy breathing; difficulty breathing in or out; deep, forceful breathing; or coughing, especially a dry cough or one that brings up mucus or blood. Needless to say, any change in your dog’s breathing may well be an emergency and warrants a trip to the veterinarian — stat!

Dogs have an insulating layer of hair or fur to keep them warm when it’s cold, but staying cool is more difficult for them. Unlike people, they don’t have an evaporative cooling system of sweat glands but must release heat by panting. That’s not very effective, so it’s important to always provide your dog with cool water and shade when he's outdoors and to limit activity in the heat of the day. That goes double for short-faced (brachycephalic) dogs such as Bulldogs or Pugs, who can quickly die of heatstroke if they aren’t kept in cool surroundings.