Home ›
Dr. Marty Becker ›
Why Do Dogs Chase Their Own Tails?

Why Do Dogs Chase Their Own Tails? 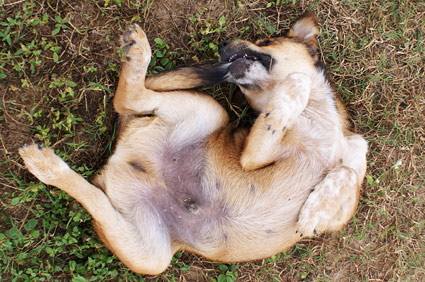 When your pooch is spinning furiously in circles, it's hard not to imagine that the poor thing actually believes his tail is furry prey. But science suggests the behavior may be caused by an actual medical condition. Dogs may be able to blame their tail-chasing habit on high cholesterol levels, according to a study published in the Journal of Small Animal Practice and reported in Veterinary Economics. Turkish researchers found that dogs who didn't chase their tails had lower levels of cholesterol than the tail-chasers did. Dogs may chase their tails because the high cholesterol levels have blocked the flow of brain hormones controlling mood and behavior. The study suggests that an increase in exercise could help lower the tail-chasing.

There may be other medical reasons for tail chasing, so if your dog is chasing his rump, let your veterinarian know.