Home ›
Dr. Marty Becker ›
Why Do Little Dogs Pick Fights With Bigger Ones?

Why Do Little Dogs Pick Fights With Bigger Ones? 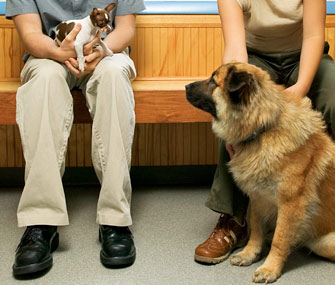 Q. I have a big dog who won’t fight, but I can’t believe how many times he’s been attacked by Chihuahuas. Why do so many little dogs want to pick fights with big dogs?

A. As a veterinarian, I can tell you I’ve patched up my share of little dogs who've taken on big dogs — and lost. Why do they do it? Small dogs are still dogs, after all, and they act like dogs, even if they’re spending a lot of time in celebrity purses. I sometimes wonder if little dogs think they are big dogs because they’re always looking down at other dogs from the relative safety of their owners’ arms or purses.

There are a couple of possible reasons why small dogs seem to have more attitude than seems sensible, given their size.

Many small dogs are terriers, small versions of terriers, or other breeds and mixes of breeds similar to terriers. These dogs were developed to keep homes and barns free of rodents, and that’s a job that requires some serious attitude, which may translate into fearlessly (and foolishly) taking on a much larger canine at the dog park. The saying “It’s not the size of the dog in the fight; it’s the size of the fight in the dog” perfectly captures the temperament of many terriers. Of course, the Chihuahua is not a terrier, but it’s a tough little dog long prized — or at least tolerated — for having its own big dog ’tude.

But there's more to this behavior than just breeding; the dog owner may be at fault, too. Small dogs tend to be a little (how should I say this?) … indulged. They’re so cute and so tiny, and if they’re obnoxious, it’s not exactly the same as dealing with 80 pounds of poor manners in a big dog. People tend to let little dogs get away with a lot of misbehavior, and owners often think it’s funny when their little dog goes after a bigger one. (I've found that the amusement ends where the veterinary bill begins.) And because they’re so tiny as puppies, people don't always properly socialize small dogs when they're young. This means that these dogs don't know how to interact with others appropriately, which can lead to disaster for the little dog — and his owner.

To be fair, I’ve met many sweet-natured and well-mannered little dogs, even Chihuahuas. And I’ve also known many little dogs attacked by larger ones who read them not as dogs but as prey.

People at the ends of both leashes need to show some common sense and not let little dogs and big dogs escalate snarls and growls into fighting. When that happens, it’s almost certain the little dog will take the worst of it, and almost as certain that the big dog will be blamed. If the other dog owner shrugs off the poor behavior of his little dog (or, worse, thinks it's cute), I'd suggest that you and your big dog just walk away.