Home ›
Dr. Marty Becker ›
Why Does My Cat... Suck Holes in Our Blanket?

Why Does My Cat... Suck Holes in Our Blanket? 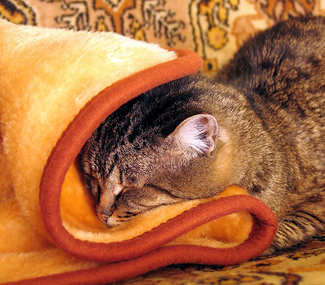 Q. My cat has developed this really weird habit of sucking on fabric. She seems to be in a trance while she’s doing it, almost like she’s on a drug. The cashmere throw at the end of our bed attracts the most attention, and it has three places where there are “sucked-up” areas that are pretty much ruined. Before I replace it, I’d like to cure her of the habit. How can I do that?

A. The behavior you’ve described is generally called pica, which is an abnormal desire to eat inedible things. Wool chewing or wool sucking is not at all uncommon in animals who have the disorder, especially in the so-called Oriental breeds such as the Siamese. Though the target is often a soft fabric — such as wool — some cats prefer other objects, such as plastic grocery bags. We’re not really sure what causes the behavior, but since it is more common in some breeds than others, it is believed to have a genetic component. It was long believed that wool chewing was a result of a kitten who was separated from her mother too soon (probably because the behavior can look like nursing), but that’s not believed to be the case today. Nor is it believed to be linked to dietary deficiency.

Unfortunately, there is no 100 percent effective cure for it. Things to try:

If all else fails, ask your veterinarian if she'd recommend medication to help with compulsive behavior.
More on Vetstreet: