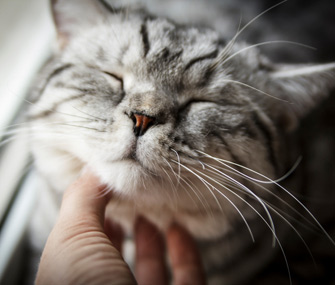 Thinkstock
Your cat may communicate in other ways and doesn't need to purr or may purr so softly that you can't hear her.

Isn’t the purr a marvelous vocalization? It’s not only a soothing sound, it’s something we can feel as we cuddle with our cats. For many people, the purr is one of the best things about living with a feline.

For years, scientists wondered how cats produced purrs. One theory suggested that the sound was made by blood reverberating through the chest. We now believe that the rumbling sound occurs when a special set of muscles is put into play, causing the vocal chords to vibrate and produce a low-pitched hum. The sound of the purr often undergoes subtle changes as cats inhale and exhale — it may be shorter and louder as the cat breathes in, longer and softer as the cat breathes out.

Purring begins as communication between mother cat and kittens. The purr may start as a request —“More milk, please!” — and become a sign of satisfaction as kittens suckle.

Grown cats may continue the “purr as request” vocalization, using an urgent-sounding purr to let their humans know they’d like to have dinner served. Cats also purr to each other in a friendly manner, both in greeting and during social time, such as mutual grooming or when catnapping together. It might be that cats purr just to keep the good times coming.

A purr isn’t always a happy sound, though. Cats may purr while they demonstrate aggression — you may have seen your cat purr even as his tail puffs up to about three times its normal size. Cats also purr when they are sick, injured or scared. It’s been suggested that the purr has healing powers, and there may well be some truth to that.

Not Every Cat Purrs

So why doesn’t your cat purr? Like I always say, cats are individuals. They communicate in many different ways — vocalizations, facial expressions, body language. It may simply be that your cat has learned other ways to communicate and doesn’t have a need to purr. Or his purr may be so soft that you just don’t notice it. Try placing your hand on his chest to see if you can feel a gentle vibration. Some people have noticed that kittens born to feral mothers tend not to purr. Maybe those cats teach their kittens to be quiet so they won’t attract predators. Other cats don’t purr loudly or often until they reach maturity.

Unless this is a recent change in your cat’s behavior, there’s no need to take him to the veterinarian just because he doesn’t purr. But it’s something you may want to ask your veterinarian about the next time you take Snowball in for a wellness visit.