Yes, There Are More Ticks To Battle 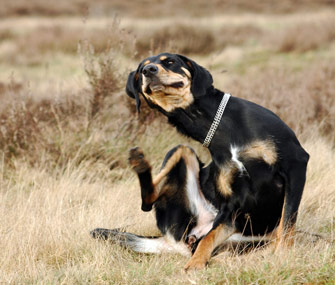 I hear it all the time in my practice: “Doc, that tick stuff just isn’t working like it used to.” More than a few people speculate that the spot-on products that revolutionized flea and tick control are no longer as effective as they used to be. To find out if that’s true, I went to the expert, Dr. Michael Dryden of Kansas State University, aka Dr. Flea, for an answer. He says the products still work just fine. “The problem is deer,” he says.

The tick population is tied to the deer population, which has been on the rise. More deer equals more ticks, and more ticks can overwhelm tick control products.

“When I started studying ticks, I didn’t know I needed to study deer,” Dryden told a room of veterinarians at last year’s convention of the American Veterinary Medical Association. “But where there are deer, there are ticks. When I was growing up, we used to stop and stare in amazement when we saw a deer. Now, you stop only if you hit one.”

Add to that an increase in the number of wild turkeys — also perfect hosts for juvenile ticks — and the successful efforts to regrow forests, as well as a mobile human population that loves to be where the wild things are, and the ticks just keep coming.

“It’s a numbers game,” Dryden says, explaining that the problem widely thought to be product-resistant ticks is really a matter of control products becoming overwhelmed. In some areas, a dog can pick up one tick per minute on a walk, and if a spot-on product eliminates all but a couple of them, the dog’s owner will consider it a failure.

Be Rigorous About The Basics

The best I can suggest — with advice from my tick-studying colleague — is to ask your veterinarian for a recommendation for a product that works best in your area. Dryden says some products seem to do better in different regions against different tick populations. For the ticks that remain — and there will always be ticks, ticks, and more ticks — picking them off with tweezers or a tick-removal tool immediately after a walk remains the best defense against the parasites and the diseases they cause.

On your property, keep grasses cut low and leaf piles cleaned up, and spray under shrubs and along fence lines, where ticks wait for you and your pets. And avoid areas where ticks are heaviest spring through fall.

Not a satisfying answer, but it’s the truth. So keep the spot-on up to date, pick off ticks when you see them, and maybe give a second thought to taking your dog for a romp in that grassy field. “Sometimes, the only thing I can advise is that you don’t take your dog where you’ve been taking your dog,” Dryden says.