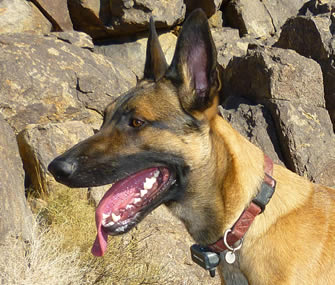 Few worse feelings exist than that hollow jolt of fear when you realize your dog is nowhere to be found. According to a recent survey conducted by the American Society for the Prevention of Cruelty to Animals, about 15 percent of pet owners lost a dog or cat in the past five years. Of the 93 percent of lost dogs that were found, only 6 percent were found at shelters. About 15 percent were found because of identification tags or microchips, and 49 percent were found by searching the neighborhood. New technologies are helping more owners with that search by leading them directly to their lost pet. Locator collars used to be expensive and were used only by hunters, but now a variety of locator collars are aimed at pet owners. They can be divided into radio and GPS types, each with their own advantages.

The Different Types of Technology

Radio collars are considered the "older" technology, but they've been improved. No longer do they all have antennas on the dog's collar (although many long-range ones designed for hunting dogs still do), but you still must be within a certain range to detect your dog. As long as you're within range (which could mean driving around until you get a signal), it takes only about a second to transmit your dog's location. Radio might not find your pet indoors, unless it's penetrating radio frequencies, which is used by one collar we looked into.

GPS collars have a larger range. Newer GPS collars employ A-GPS (the A is for "assisted," but you'll also see it called "advanced"). A-GPS improves the time it takes to actually locate your dog after turning on the unit. Plain GPS relies on satellite signals only, which typically takes about 30 seconds, but can take up to 12 minutes in areas in which open sky transmission is limited. A-GPS also relies on network resources. It takes as little as a second in good conditions and two or three minutes in bad conditions — a big difference when you're tracking your lost dog.

A-GPS also allows pets to be found indoors. If your pet is indoors without a clear view of the sky, the transmitter is unlikely to get a regular GPS signal, so if your pet's in somebody's house, plain GPS won't help you find it. A-GPS probably will, although it's generally restricted to areas where your cell phone gets reception.

WAAS-GPS stands for Wide Area Augmentation System GPS. It has better accuracy than standard GPS. While GPS will pinpoint your dog within a 30-foot range, WAAS will do so within a 10-foot range. WAAS-GPS is not as fast as A-GPS in fixating position.

Some collars combine GPS with radio signals, sending the information via radio signal to a dedicated receiver. Most combine GPS with communication networks, sending the information to your computer or mobile device. Those relying on GPS require that the dog be in an area of reception for their dedicated provider network. Make sure to check your network coverage!

Unlike radio collars, most of the GPS collars do not operate outside the United States. All require subscription fees. And of course, if the company goes out of business, the collar is rendered useless. This happened with The Global Pet Finder.

Battery life is an important issue. If your dog is lost, the collar won't transmit once the battery is dead, which can happen quickly in some units. Battery life depends on how often you have the unit set to check in. The more it checks in, the shorter the battery life. In our list below, you'll see the battery life range given by the manufacturer, which depends on whether the unit is in resting or transmitting mode. Radio collars generally have better battery life than GPS collars.

Several collars include the ability to set up boundaries (like imaginary fences), and if your pet goes beyond them, you're sent an alert. This is a useful feature for a dog that escapes from the yard — or breaks into the flower garden! But this can be irritating when you take your dog for a walk or drive, unless you can turn it off easily.

Collar weight and limitations vary. The transmitters can be too heavy for cats and for dogs under 10 pounds, and most are not designed to be submerged in water. If your dog is swimming, you need to take special precautions to shield any USB ports or electrical components.

Following are descriptions of the major locator collars on the market. Be sure to check the product's website before making a final decision since prices and features change frequently.