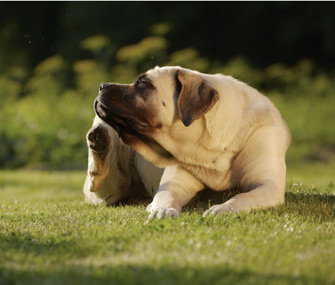 You want your pet to look good and feel good. But if he’s suffering from atopy — an allergic skin reaction – neither is the case. The itching can make your dog or cat miserable, and redness, rashes, bleeding, and skin infections are worse. They can be caused by environmental allergies, which typically can be treated with a range of things, from removing known allergens from the environment to antihistamines and supplements to immunotherapy or immunosuppression, depending on the allergic reaction and the pet.

Atopy (also referred to as “atopic dermatitis” and previously known as “allergic inhalant dermatitis”) is a common canine and feline condition in which allergens present in the environment effect an allergic reaction in the skin. It is one of several known causes of allergic skin disease, a common umbrella term for a group of allergies that manifest in the skin.

Atopy is believed to happen when certain proteins present in the environment are taken into the body through inhalation or direct contact with the skin. When they precipitate an allergic response, these proteins are referred to as allergens. When the allergic response happens in the skin, the result is almost always an inflammation of the skin we refer to as “allergic dermatitis.”

A genetic basis is well understood to underlie atopic dermatitis in dogs, but this has not been proven in cats. In both species, other factors including geography (regional pollens and plants), the presence of other allergens (like fleas) and endocrine diseases (like thyroid disease in dogs) — can worsen, mimic, and/or underlie atopic disease.

Animals with atopy become very itchy; the resultant scratching leads to skin injuries and secondary skin infections. Atopy is usually first noticed in dogs and cats younger than 3 years of age, although older pets can also be affected. Unfortunately, pets that develop atopy are usually plagued by skin problems throughout their lives.

Atopic dermatitis is characterized by the variable presence of itching, redness, pustules (infected pimples), wheals (like hives), and crusts. The face, legs, feet, ventrum (belly, underarms, and groin), and ears are most often affected, but no area of the body is off limits. In dogs, ear infections are very commonly associated with atopy.

Cats usually display signs of excessive licking in a symmetrical pattern (on the belly, back, and behind the legs is most common) and/or they can develop tiny scabs around the neck, tail base, or elsewhere on the body.

A more comprehensive list of signs in dogs and cats includes:

A hallmark of atopic dermatitis is that signs tend to be seasonal and tend to wax and wane in severity. However, pets that are allergic to house dust mites or other indoor allergens can have year-round problems, because exposure to indoor allergens is not dependent on season of the year.

Most pets are diagnosed based on signs, history, and response to treatments, but getting to a definitive diagnosis can be a complicated affair. Given that every affected animal suffers a highly individualized version of the disease, determining what an animal is allergic to may require intradermal (skin) testing and/or serum testing (blood testing).

Intradermal skin testing can sometimes be performed at your veterinarian’s office. However, because the allergens used for this test are very specific (they vary depending on your region of the country), your veterinarian may refer you to a veterinary dermatologist.

Usually, an area of fur is shaved from your pet to expose enough skin to perform the test. Tiny amounts of each test allergen are injected using very small needles just under your pet’s skin in different areas. After a brief waiting period, your veterinarian will examine the injection sites to measure the degree of local allergic response (redness or a small hive). Allergens that your pet is not allergic to will not cause a reaction, and allergens that your pet is allergic to will cause a reaction that corresponds to the severity of the allergy. Pets are monitored carefully during the procedure in case a serious reaction occurs and treatment is required.

Depending on which type of allergy test is performed, you may need to discontinue your pet’s allergy medications before the test. Otherwise, the test results may be affected. Your veterinarian will tell you which medications can be used and which ones may need to be discontinued.

Four categories of treatment have been described. They comprise:

1. Avoidance (removing allergens from the environment or changing environments altogether)

This is typically undertaken only after a list of allergens is identified via blood or intradermal testing.

2. Symptomatic therapy (as when using antihistamines, fatty acid supplements, medicated shampoos, and antimicrobials for common secondary bacterial and yeast infections) is the most commonly recommended approach to treatment, especially for pets with mild clinical signs:

Antihistamines: Drugs like diphenhydramine have few side effects compared with some other therapies. However, some pets will not respond to antihistamines alone. Avoid giving human drugs to your pet unless directed to do so by your veterinarian.

Topical treatments: Medicated shampoos, leave-on conditioners, and ointments can relieve a pet’s itching or help with secondary conditions such as fungal infections, bacterial infections, and scaling. Treatment should be repeated frequently for best results, but be sure to follow all label directions carefully. Avoid the use of human products on pets unless they are recommended by your veterinarian.

3. Immunotherapy (using specific allergens to desensitize a pet to the proteins)

Once a list of “problem” allergens is identified via blood or intradermal skin testing, a specialized “serum” containing small quantities of these allergens can be formulated specifically for your pet. Through injection of small amounts of the allergy serum over time, many pets experience a reduced response to the allergens.

This treatment, called immunotherapy, generally must be continued for several months to years to achieve results. With immunotherapy, the pet owner generally administers the allergy serum injections at home. If you are uncomfortable with giving injections, ask your veterinary care team if the injections can be given at your veterinarian’s office. The first injections are more diluted, and each following injection has a slightly higher concentration of the allergens. Your veterinarian will schedule theinjections according to specific guidelines — more frequently in the beginning, and eventually tapering to one injection every few weeks. Many pets respond to this program. Others may not, especially if they have other underlying conditions.

4. Immunosuppressive therapy (with corticosteroids like prednisone, cyclosporine, or other drugs)

Unfortunately, some pets’ atopic disease cannot be controlled by any of the above approaches and their quality of life may suffer drastically unless more intensive drug therapy is initiated:

Steroids: Drugs like prednisone or dexamethasone, which are called corticosteroids, are often used because they tend to be very effective and safe for short-term use. These medications can be given by injection, by mouth, or as topical ointments or shampoos. Corticosteroids can provide immediate relief but may have undesirable side effects, such as increased appetite, thirst, and urination. In some cases, repeated or long-term use of steroids can be associated with an increased risk of medical problems such as liver problems, adrenal gland problems, and diabetes.

Cyclosporine: Cyclosporine can be used to control atopic dermatitis in dogs and allergic dermatitis (including atopy) in cats. The medication is given once a day for 4 weeks (4 to 6 weeks in cats, based on response). After that, the dose can be tapered to every other day or twice weekly, as needed to maintain effectiveness. Researchers estimate that over 70% of dogs and cats respond to this treatment; however, cyclosporine can be costly, and its side effects may include stomach upset and diarrhea. Ask your veterinarian if cyclosporine may be a good choice for your pet.

Many of the therapies described here can be used to control atopy over the long term. Avoidance of problem allergens may be the best way to prevent flare-ups for dogs and cats with atopy.