Cardiomyopathy in Dogs and Cats 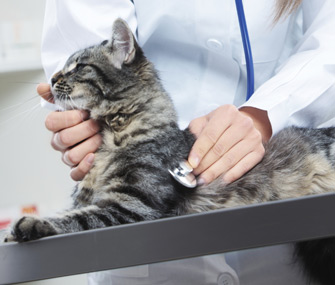 Cardiomyopathy, which literally means disease of the heart muscle, can strike both dogs and cats in different ways. Symptoms are varied, ranging from collapse and weakness to difficulty breathing and sudden death. Fortunately, veterinarians are often able to diagnose the disease before symptoms occur and may be able to prescribe drugs to keep symptoms in check.

Cardiomyopathy refers to any disease that affects the heart muscle. Diseases of this type fall into one of three major categories: dilated cardiomyopathy, hypertrophic cardiomyopathy, and restrictive cardiomyopathy. All of them are considered idiopathic, meaning the exact cause is not fully understood.

Dilated cardiomyopathy is characterized by the cardiac muscle’s inability to contract properly. Decreased contractility means that the heart cannot pump blood adequately, which leads to poor circulation and other complications including irregular heart rate and heart failure.

Dilated cardiomyopathy is the most common kind of cardiomyopathy observed in dogs. It is fairly widespread among certain breeds and presumed to be hereditary. Large-breed dogs are most likely to acquire the condition and generally do so during or after middle age.

Cats may develop dilated cardiomyopathy also, generally caused by a nutritional deficiency in the amino acid taurine, which leads to an inability to support normal cardiac muscle function. However the most common type of cardiomyopathy in cats is an inherited disease called hypertrophic cardiomyopathy. The exact way the disease occurs in cats is unknown, but the result is that the heart muscle becomes extremely thickened with normal and abnormal cells. The thickened muscle can’t relax and contract normally, which decreases the amount of blood that the heart can handle. Heart failure results because there is so little room for blood to collect and be pumped out to the rest of the body. Because certain breeds of cats are more often affected (some as young as 3 months and others as old as 17 years, but generally around middle age), it is assumed to be hereditary.

Restrictive cardiomyopathy is relatively rare and poorly understood. With this condition, the cat’s heart muscle begins “filling in,” encroaching on the heart’s four chambers and limiting blood output, usually severely.

The symptoms of cardiomyopathy can vary. In some cases of dilated cardiomyopathy, the disease is characterized by collapse, weakness, and, occasionally, by sudden death. These events are usually the result of changes in electrical conduction in the heart muscle. Some affected dogs may live long enough to suffer from congestive heart failure, for which coughing and difficulty breathing are the most typical signs.

In other cases, sudden death and collapse may not occur. Instead, heart failure with fluid buildup in the abdomen (ascites), weakness, exercise intolerance, and fluid in the chest cavity or lungs are the most common signs.

In cats, hypertrophic cardiomyopathy can prove completely asymptomatic (meaning no outward signs of disease are observed). Alternatively, it can lead to collapse or difficulty breathing, life-threatening blood clots, or sudden death (for animals who suffer unexpected, devastating electrical disturbances to their heart rhythms).

Veterinarians can often identify cardiomypathy before signs occur. A heart murmur (abnormal sounds in-between heart beats) may be detected, though in many cases, animals won’t develop one before succumbing to the disease.

Diagnosis is typically achieved with X-rays (demonstrating marked enlargement of the heart); EKGs (electrocardiograms, which may or may not show electrical disturbances in the heart); and, most effectively, via cardiac ultrasonography (echocardiograms), in order to characterize the physical changes in the heart muscle.

Among cats, Maine Coons, Persians, and American Shorthairs are predisposed to hypertrophic cardiomyopathy, though all cats are potentially at risk.

Treatment usually involves administering medication to control the clinical signs of congestive heart failure and cardiac enlargement while increasing the ability of the heart muscle to contract. For cats, an additional goal is to reduce the possibility of blood clot formation.

Feeding cats a nutritionally complete diet can reduce their risk of developing dilated cardiomyopathy associated with taurine deficiency. However, most types of cardiomyopathy in dogs and cats are likely hereditary, so removing affected pets from the breeding pool is recommended.

Find out which pets are your best… ›
READ MORE: Cats, Cat and Dog Conditions, Heart Health