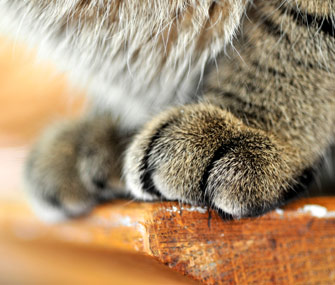 What Is Declaw Surgery?

Declaw surgery, also known as onychectomy, generally involves the surgical removal of the claw and all or a portion of the last bone in each digit. It is usually performed on the front paws only. Younger cats (under 1 year of age) tolerate the procedure better than older or obese cats that bear more weight on their paws.

Why Are Cats Declawed?

Scratching on surfaces is a natural behavior for cats. It’s how cats sharpen their claws and mark their territory. But when cats scratch on household items like furniture, stereo speakers, rugs, and screen doors, it can be seen as destructive behavior. In most cases, this behavior can be avoided by training cats to scratch on more appropriate surfaces, such as scratching posts, and by keeping their nails trimmed.

Because the procedure can be very painful, it’s best to explore other alternatives before deciding to declaw your cat. Cats that go outdoors generally shouldn’t be declawed because it deprives them of a primary mode of defense against other animals.

What Are the Alternatives to Declawing?

There are a number of steps you can take to prevent destructive scratching:

Are There Different Kinds of Declaw Surgeries?

Yes. The technique varies depending on the preference of the veterinarian. There are two traditional surgical techniques, which involve using either a scalpel or a clipper to remove the claw. A third surgical technique uses a laser to remove the claw. With this procedure, there is relatively little bleeding, and some cats (especially young cats that are not overweight) have less postoperative pain. Laser declawing tends to be more expensive than other techniques, and not every veterinarian has the equipment to perform this procedure. A final technique, called a tendonectomy, does not remove the claws, but instead cuts the tendons on the underside of the paw. With this procedure, the claws remain retracted in the paw, so they generally can’t cause harm as long as they are trimmed on a regular basis.

How Do I Care for My Cat After Surgery?

Replace your regular litter with shredded newspaper or commercial litter made of newspaper until your cat’s paws have healed. This is to prevent granules of litter from becoming embedded in the healing tissues.

Some cats may experience temporary lameness after declaw surgery. If you notice any swelling, bleeding, or discharge, or if the lameness doesn’t improve, see your veterinarian.


This article has been reviewed by a Veterinarian.

Find out which pets are your best… ›
READ MORE: Cats, Procedures Tests and Treatments, Surgery