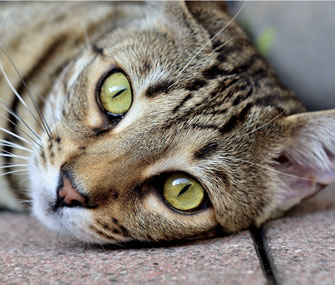 Contrary to what its name implies, feline leukemia (abbreviated as FeLV or sometimes referred to as “feleuk”) is not just a type of blood cancer (although feline leukemia infection is associated with blood cancer and other types of cancers). Feline leukemia is a viral infection in cats that is spread through the secretions of infected cats and can set up shop in almost any organ in a cat’s body. The condition can be hard to detect as symptoms are many and varied but can include fever, lethargy and anemia. No medication can eliminate FeLV, so most treatments are aimed at managing the symptoms and complications as the disease progresses. Some infected cats ultimately die from the disease, but many others can live long, comfortable lives with it. Keeping your at-risk cat current on his vaccinations will help prevent it.

Feline leukemia virus (FeLV) is considered moderately contagious among cats. Unlike many other viruses that enter the body’s cells and destroy them, FeLV enters certain cells in a cat’s body and changes their genetic characteristics. This permits FeLV to continue reproducing within the cat each time infected cells divide. In some cases, FeLV can become dormant (inactive), making its ability to show symptoms and transmit the disease difficult to predict.

FeLV is generally transmitted when a cat comes into contact with saliva from an infected cat; nasal secretions, urine, feces, and other body fluids can also help spread the disease. Certain social behaviors, such as mutual grooming and sharing food or water bowls, can spread the disease. Kittens can become infected during fetal development or during the first days of life as their mothers nurse and care for them.

Unlike some other viruses, FeLV does not linger long in the environment. That’s why cats generally have to have direct contact with an infected cat for the disease to spread. However, predicting which cats can transmit the disease is complicated because some contagious cats never develop signs of infection.

Some cats infected with FeLV don’t develop clinical signs or long-term complications associated with the virus. Alternatively, the immune system of some cats can eliminate the infection entirely before the cat ever becomes sick.

In other cats, the virus can “hide” in the bone marrow, where it is difficult to detect until it begins to cause problems later in life. Still another subset of cats will become carriers of the disease or experience various illnesses before eventually dying of FeLV-associated complications.

Because FeLV can affect almost any organ system in the body, clinical signs can vary significantly. Signs of FeLV can include:

Diagnosis of FeLV infection is more complicated because there are several stages of disease and not every cat handles FeLV infection the same way. Blood tests detect the disease in many cats, but for other cats, the bone marrow must be examined to confirm infection. Some cats may test positive on blood tests when they are young kittens but test negative later if their immune systems have eliminated the infection.

Similarly, some cats may test negative at one point and positive later, as the virus progresses through various stages. Because FeLV infection can have many clinical presentations, your veterinarian may want to test your cat if he or she seems ill — especially if a fever is present. Some cats need to have multiple tests done to confirm infection.

All breeds of cats are susceptible.

No medication can eliminate the FeLV infection. Most treatments are aimed at managing the clinical signs and complications and seeing a cat through this often-devastating process — often episodic and recurrent — supportively. Fluids, and antibiotics for any secondary infections are among the techniques most veterinarians employ.

Unfortunately, some cats eventually die in spite of aggressive treatment.

Kittens are generally vaccinated against FeLV around 8 to 9 weeks old. Booster vaccinations are given 3 to 4 weeks later, according to vaccine label recommendations, followed by boosters every year for as long as their risk for exposure remains. Cats that go outdoors or live with many other cats are at greater risk for exposure to FeLV compared with cats that stay indoors and have limited contact with other cats.

Note: If a cat’s risk for exposure to FeLV is low, a veterinarian may not recommend the FeLV vaccine at all.

Keeping infected cats separated from uninfected cats can reduce the likelihood of spreading FeLV. Any new kitten or cat introduced into the home should be examined by a veterinarian immediately and tested for FeLV before introduction to the rest of the household’s cats.