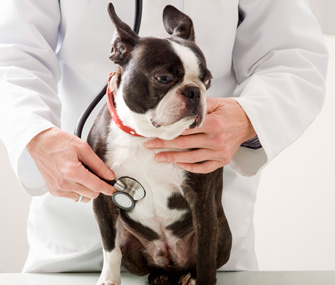 Mitral valve disease is not just a disease of the heart. It’s the disease of the heart for dogs, responsible for a full three-fourths of all canine heart diseases. It’s caused by a degenerative process thought to be genetic. A low-grade heart murmur may be the only early warning sign. Later on, coughing, exercise intolerance, rapid breathing, or fainting may develop. Treatment generally involves medication to ease the burden on the heart and promote better functioning, as well as medications to help control blood pressure and fluid retention. Other modalities include a low-sodium diet and exercise restriction.

This degenerative disease of the heart’s mitral valve (the left atrioventricular valve) is the most common cardiac condition in dogs. While it’s responsible for 75 percent of all heart diseases in dogs, it’s less common in cats.

The heart muscle is a pump that moves blood through the four chambers using involuntary contractions that promote the one-directional flow of the blood. The valves between the chambers form a tight seal that prevents the backflow of blood into the preceding chamber, thus keeping the blood flowing in the forward direction.

When the valves degenerate over time, they become thickened and deformed, thereby losing the tight seal and causing some blood to move backward in the heart. When the valve between the two left chambers of the heart (the mitral valve, between the left atrium and left ventricle) fails to form a tight seal, blood moves in a backward direction (into the left atrium) when the left ventricle contracts. This means the heart has to work harder to pump the volume of blood the body needs for normal functions.

Dogs with early or mild mitral valve disease may be identified by a heart murmur of low-grade severity heard loudest (using a stethoscope) over the left side of the chest. In these cases, no other clinical signs are typically observed. As this progressive disease advances, coughing, exercise intolerance, and increased respiratory rate and/or effort may develop. Fainting or collapsing may also occur, as well as sudden death (in rare cases).

Dogs with advanced or severe mitral valve disease may also experience symptoms consistent with heart failure. Heart failure occurs when the heart can no longer pump the requisite amount of blood for normal body functions. When this happens, fluid accumulates in the lungs, a condition veterinarians call pulmonary edema.

To identify this disease among dogs who suffer characteristic murmurs or other telltale symptoms, diagnosis is best achieved through chest X-rays, electrocardiograms (EKG), and echocardiography (ultrasound of the heart) with Doppler technology (demonstrating the flow of blood) to elucidate the abnormal change in the dimensions of the heart and the blood flow through the region of the mitral valve.

A consultation with a veterinary cardiologist may be recommended for some affected dogs.

Any dog can develop mitral valve disease. Cavalier King Charles Spaniels, Dachshunds, Poodles, and Chihuahuas are among the breeds that seem predisposed.

Treatment for mitral valve disease relies heavily on drugs. These include specific medications to ease the burden on the heart, diuretics for removal of excess fluid, medication to help regulate blood pressure, and other medications to help relieve the symptoms of heart failure. Additional therapies include a low-sodium diet and exercise restriction.

Luckily, a great many mitral valve disease patients don’t require any treatment at all until they show symptoms. And most who do tend to live well with drug therapy alone. Only the severely diseased tend to succumb, in spite of treatment.

Preventing mitral valve disease requires removing affected dogs from the breeding pool. This is especially critical for breeds like the Cavalier King Charles, whose extreme predisposition recommends that they receive cardiac ultrasounds (echocardiograms) before they enter any breeding program.

Find out which pets are your best… ›
READ MORE: Dogs, Heart Health