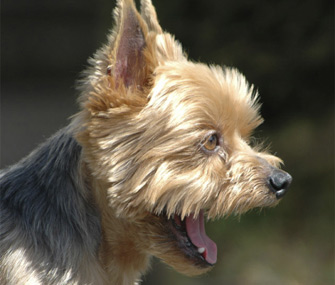 Pets are like a breath of fresh air on a stifling hot day. But when a pet can’t get a breath of fresh air? That’s what happens with a tracheal collapse, and it’s a genetic condition that runs in the lines of little dogs. The biggest tip-off of the disorder is that a dog coughs when he gets very excited or while playing or exercising. Mild cases can be left alone; medications to keep a dog calm or limit the sensitivity of the trachea can be prescribed in more serious cases. In especially severe situations, surgery may provide relief.

Tracheal collapse, also referred to as collapsing trachea, is a common disorder of the windpipe in dogs. It’s an inherited disorder in which the trachea’s normally firm cartilage rings of support are softer and less supportive than they should be. In these cases, inhaling air during the normal act of breathing can cause the trachea to collapse on itself (much like a flimsy straw would with a thick milkshake), which typically elicits a hacking cough. This happens most often with excitement and/or exercise. The inflammation that results in tracheas thus affected can mean chronic discomfort for the (typically tiny) dogs affected.

The mode of inheritance of this disorder has not been worked out.

Observing a characteristic hacking or honking cough that occurs with excitement or exercise is the most common way milder forms of this disease are diagnosed. Middle-aged to older dogs are more often affected.

With more severe cases, simple X-rays or more sophisticated measures like fluoroscopy (akin to a real-time, moving X-ray) are used to determine the extent of the narrowing of the airway. A scope to visualize the airway directly is often recommended. (This procedure requires anesthesia.)

Ensuring no underlying cardiac disease is present is a basic approach as well. That’s why echocardiography, an ultrasound of the heart, may be undertaken in some cases.

Miniature, toy, and teacup dogs are most often affected. The Yorkshire Terrier, Pomeranian, and Toy Poodle are overrepresented among afflicted breeds.

Treatment for mild cases is not always necessary. Though some training to reduce excessive excitement (which elicits symptoms) can be very effective, this step is not considered mandatory to help dogs maintain an excellent quality of life.

For moderate to severe cases, the administration of medications that reduce excitement and/or limit the sensitivity of the trachea can be helpful. Sedatives, bronchodilators, nebulization (or vaporization), and the occasional implementation of corticosteroids to address the inflammation of the trachea are typical approaches. For the most severe cases, surgery may be recommended.

All affected dogs should wear harnesses, not collars, to limit external pressure on their tracheas.

Limiting the inheritance of this trait has proven difficult, as the disease often doesn’t make itself known until later in life –– well after animals have been bred.

Find out which pets are your best… ›
READ MORE: Dogs, Respiratory Health