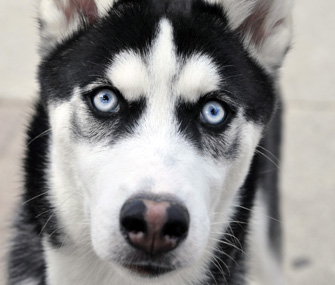 Uveodermatologic syndrome is a rare disease in which the dog’s immune system forms antibodies against its own pigment cells in the skin and light-sensing cells in the back of the eye. It causes red, painful eyes, skin depigmentation on the face and footpads, and premature whitening of the hair. Because the skin and hair issues are cosmetic, treatment focuses on the eye problems, which are typically ongoing and can lead to permanent blindness.

In humans, a condition known as Vogt-Koyanagi-Harada syndrome produces eye, skin, and nervous system symptoms. Uveodermatologic syndrome is the canine counterpart to this human disease complex; however, most dogs do not have nervous system signs.

Affected dogs usually experience eye problems, including uveitis (inflammation of a layer of the eye), vitiligo (skin depigmentation), and a premature whitening of the hair (poliosis). It’s important to understand that the worst-case scenario for the skin is merely cosmetic, while that for the eyes is much worse: blindness.

The cause is believed to be related to the immune system’s destruction of cells in the retina of the eye and melanocytes (pigment-making cells) the skin and hair. It’s been postulated that a virus may trigger the process. Exposure to sunlight may exacerbate the problem.

Most dogs initially present signs related to eye discomfort. Painful, red eyes are common, and dogs may be sensitive to bright light. Vision changes are often noted when dogs begin to bump into things. Constricted pupils and clouding of the eyes are typical as well.

Many affected dogs will have vitiligo (depigmentation of the skin) — most evident on the nose, lips, eyelids, footpads, and scrotum, vulva, and anus. These areas should be biopsied to help achieve a definitive diagnosis.

Treatment is directed at the uveitis affecting the eyes. Systemic immunosuppressive drugs are typically prescribed along with topical treatments for the eyes.

In general, dogs with uveodermatologic syndrome have ongoing and serious eye issues, requiring treatment for months or years. The eye problems tend to recur, and irreversible blindness is common. Aggressive therapy to subdue the immune system can help relieve the inflammation in the eyes and slow the progression of vision impairment.

Find out which pets are your best… ›
READ MORE: Dogs, Eye Health