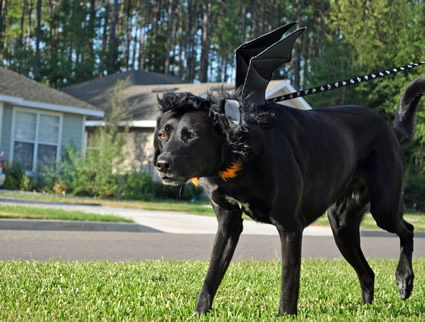 Writing about pets isn't all fun and games, but, sometimes, it's pretty amazing. Like when Animal Planet asks some of its favorite bloggers to dress their pets in Animal Planet Halloween costumes for a festive pet parade. I submitted a photo of my 4-year-old black Lab mix, Rudi, wearing the bat costume (pictured here), and I know I'm a little biased, but I'm pretty sure she's officially the Cutest Thing Ever. Now, my thinking it doesn't make it so, but your votes do. Head over to the Animal Planet Virtual Pet Parade and rate the adorable animals.

In the interest of full disclosure, I want to tell you that, if Rudi wins, I would have the opportunity to guest-post at Animal Planet's Daily Treat blog, and I would get a basket of Animal Planet pet products, which I will happily donate to my local rescue. However, I don't want to put any pressure on you, so even if Rudi doesn't win, I'll make a cash donation. Either way, homeless pets win, but why not have fun with it? Go cast your votes (it takes only a minute), and share with your friends. And be sure to let us know which pet you think is the cutest!

Find out which pets are your best… ›
READ MORE: Dogs, Fashion, Pet Products