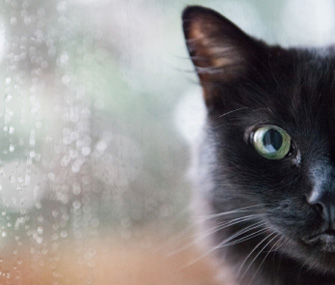 For thousands of years, superstitions regarding cats and dogs have guided people’s behavior — or just made for good fireside stories. Most everyone is familiar with the belief that black cats bring bad luck or that a howling dog signifies that someone is about to die. (If that were truly the case, people would be dropping right and left every time an ambulance goes by with its siren blaring.) Animal-related beliefs have existed around the world for millennia. I've gone through my files to seek out a few of the more unusual ones. Here are eight superstitions and myths about dogs and cats that you might not know.

Cats for Luck and Longevity

Black cats bring good luck. In Britain, a bride and groom who encounter a black cat on their wedding day are ensured a happy marriage. Sailors, a notoriously superstitious lot, avoid saying the word “cat,” but having a black cat aboard ship is believed to bring good fortune. In fact, the wives of sailors used to keep black cats to ensure their husbands’ safe return.

A cat in the cradle protects babies. A well-known (and need I say unfounded) myth is that cats will jump into a crib and suck a sleeping baby’s breath. In Russia, however, new parents used to put a cat into a cradle to drive off evil spirits that might harm the baby. Smart thinking! Who better than a loving and protective cat with super night vision and an alert nature to ward off any natural — or supernatural — meanies? (Of course, folklore notwithstanding, you never want to leave any pet with a baby unsupervised.)

Cats won’t run away if you take certain actions. Moving? Bring your cat into the new place through the window and he won’t leave (presumably because he doesn’t know where the door is). Or rub his paws with butter. The theory behind this one is that by the time he finishes licking all the butter off his paws, he’ll be used to the new place and won’t want to leave.

Cats have nine lives. We’ve all heard that one, of course, but do you know why? My theory is that the belief is tied to cats’ incredible survival skills. Their finely tuned senses, speed, agility and an arsenal of sharp teeth and claws (weapons of mouse destruction) allow them to seemingly defy death time and again.

More Than a Guide Dog

The lick of a dog has healing powers. Ancient Greeks and Romans had temple dogs known as cynotherapists whose licks were believed to cure disease. Maybe they were onto something — we know today that petting a dog can lower blood pressure. Some dogs can also scent out cancers and other signs of illness such as high blood sugar. About that licking, though: Although chemical analysis of canine saliva shows that it has some minor antibacterial properties, your dog isn’t really trying to heal you. He is most likely attracted to the sweet taste of the serum produced by oozing sores.

Dogs lead us to the next world. Cultures around the world associate dogs with the path to heaven — or Hades. A three-headed dog named Cerberus guarded the entrance to Hades, ensuring that no one went in — or out — who wasn’t supposed to. A Greco-Egyptian god known as Hermanubis guided souls to heaven, using secret passwords to ward off menacing spirits and open locked gates. Aztecs had the dog-headed god Xolotl, who guided souls to the underworld. And in Persia (modern-day Iran), followers of the Zoroastrian religion used dogs to determine if someone was really dead — maybe they licked their toes to see if they giggled — and to scare away any lurking demons.