Home ›
Dr. Marty Becker ›
Am I a Bad Pet Owner If My Dog Doesn’t Play With Other Dogs?

Am I a Bad Pet Owner If My Dog Doesn’t Play With Other Dogs? 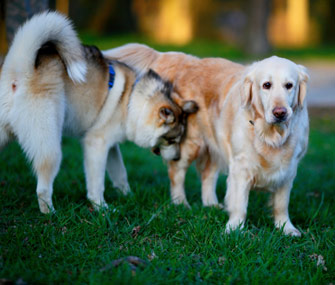 Thinkstock
Not every dog is suited to visiting the dog park. Consider your canine's personality before taking him to one.

We all love the idea of dogs frolicking with their canine friends — romping together, chasing each other, playing tug, then snuggling for a nap. It’s a classic image.

Dogs are, of course, our best friends, but are they each other’s best friends? Not necessarily.


Like people, dog breeds and individual dogs have different personalities or temperaments. Often, it’s because they’ve been bred to do certain things or behave a certain way. Whatever the reason, a dog's temperament can influence his willingness to play with other dogs.

Breeds that were created to guard flocks or property may instinctively ward off predators or intruders — and that includes other dogs. Some of these canines can get along fine with other dogs if they have been raised with them, but they don’t necessarily want to play with them.

Scenthounds such as Beagles, Bassets or the various coonhound and foxhound breeds, on the other hand, usually work as a team to find and catch their prey. They’re often referred to as pack dogs, and they may be more inclined to like having canine company. In general, these are dogs who like to socialize with their doggie friends.

And some dogs — American Pit Bull Terriers, Golden Retrievers and Cavalier King Charles Spaniels immediately come to mind — are so focused on their people that they don’t always have a lot of interest in other dogs. This doesn’t always mean they don’t like the other dogs, but if it’s a choice between playing with a dog and playing with a person, chances are these pooches are going to choose the person.