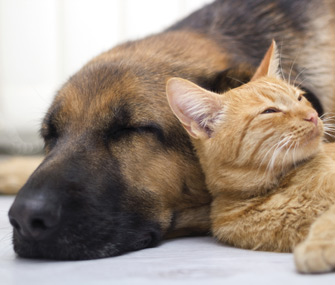 Can dogs and cats live happily together? It can be hard to tell: For every YouTube video of cats making dogs' lives miserable, there is an equal number of adorable photos of the two species snuggling together. In reality, dogs and cats often are the best of friends — or will at least tolerate each other amicably enough.

But any time there’s more than one animal of any species in a home, there’s potential for conflict. That is especially true when you're talking about members of the same species whose activity levels aren’t compatible, or pets of different species whose biological and behavioral imperatives run counter to each other.

Despite their differences, though, multiple pets can often coexist happily, as long as their behaviors are understood and their needs are met. Here are some ways to ensure a mutually agreeable relationship.

Thinking of getting a puppy or kitten to liven up your older animal? Think twice — and then a third time — before doing so. It’s not always a bad idea, but too often it results in the senior pet either becoming neglected or being annoyed by the young whippersnapper.

If you do want to add a puppy or kitten, consider your older animal’s personality and size. If you have a grumpy Chihuahua, he’s not going to take kindly to being trampled by an energetic Lab puppy, and he could even get hurt. Choose a dog — or cat — who is closer to his size. It may also help if your new dog is of the opposite sex of the one you already have.

If you want to have two cats, it’s best to acquire them as littermates. Didn’t plan that far ahead? Choose an adult cat with a mild personality who won’t rock your older cat’s boat.

What about bringing a cat into a home with a dog, or vice versa? The two species can undoubtedly become best friends, but they aren’t natural-born buddies. They have distinctly different social structures, for one thing: Cats tend to be solitary, while dogs are more pack-oriented. Both are predators, but some dogs can be predatory toward cats unless they are brought up with them from an early age. Cats can have hissy fits when dogs invade their litterbox for “snacks,” and dogs may snarl at a cat strolling by their beloved food bowl — even if the cat has no interest in the dog’s food. You can overcome these types of conflicts by being aware of them and taking steps to avoid them.

Whether you’re dealing with interspecies or same-species tussles, the first step is to discover the source of the spat: prey drive, territory wars or resource ruckuses. Once you understand the root of the problem, you can solve it with training, behavior modification or environmental changes.

For instance, if your dog is raiding the cat’s litterbox, you may need to switch to a covered litterbox or put up a barrier that deters the dog but not the cat. Try a pet gate that your cat can scramble over but your dog can’t. Or cut a small square out of the bottom of the gate that’s just large enough for your cat to squeeze through.

To avoid food fights, feed pets separately. Put them in different rooms, or feed cats on an elevated surface and dogs in their crates or outdoors. Doing so ensures that everyone gets the appropriate amount of food and no one is stressed by having another animal trying to horn in on his dinner.