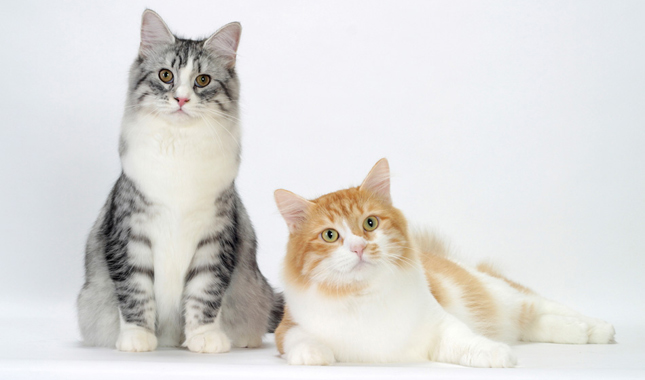 Tetsu Yamazaki, Animal Photography
The Siberian has a thick double coat with a neck ruff, perfect for surviving those cold northern Russia winters.

Siberian: Also hailing from Russia, the Siberian prowls through life in a glamorous fur coat, but he’s not a snob. The national cat of Russia has a gentle, good-natured temperament, leavened by a tendency toward madcap adventures. His thick coat comes in many colors and patterns, but brown tabby is most common — if you can use that word to describe this handsome cat, with his elegant neck ruff, tufted ears and large yellow-green eyes. The Siberian can be large, weighing up to 25 pounds!

Singapura: Talk about a journey! This natural breed went from living on the street to being considered a national treasure. The smallest of the domesticated cat breeds, the Singapura was found as a street cat on the island city-state of Singapore in the 1970s and developed into a breed. Nicknamed the Pura, he weighs only 4 to 7 pounds. Other distinguishing features are his big ears and his short, ivory-colored coat with brown ticking that makes him look as if he has just stepped out of an old-time photo.

Thai: When you look at this cat, you might think, “Why, that’s a Siamese.” He is actually known in some places as the “old-style Siamese,” from a time before those cats were developed to have the elongated look of a runway model. The Thai is considered to be the native pointed cat of Thailand in original dress: He has a wide head with rounded sides, a wedge-shaped muzzle and a moderate body with a short, silky coat. Like his cousin the Siamese, he’s typically active, smart and mischievous, wanting nothing more than to be your best friend.