Home ›
Dr. Marty Becker ›
Have a Mangy Cat? 5 Mites That Can Frustrate Your Feline

Have a Mangy Cat? 5 Mites That Can Frustrate Your Feline 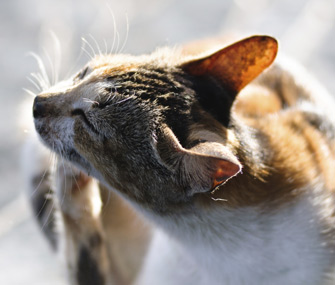 Mangy old cat. That’s often our first thought when we see a cat with bare patches on his head, neck and ears, or elsewhere on his body. Mange is a catchall term for several skin conditions caused by various types of mites — tiny, spiderlike critters that make themselves at home on a cat’s skin or inside the ear canals. If your cat is missing patches of fur, is miserably itchy and has dandruff, he might be hosting a colony of these troublesome parasites.

Anything that causes cats to itch is a real problem. They don’t feel good, they don’t sleep or eat well and they get downright grouchy. You would, too, if you were constantly scratching an itch. Itchy cats can scratch and bite themselves so badly that they develop infected sores.

While most mites are more likely to infest dogs, our feline friends can acquire them in certain situations. The cat most likely to earn the moniker of "mangy" lives with dogs or other cats who have mites, lives in certain regions where particular mites are common — primarily the southern and Gulf Coast areas of the United States — and doesn’t receive a regular external parasite preventive that is labeled for mites.

There are five types of mites that give cats the big itch:

We veterinarians most commonly see Otodectes inside the ear canal, but the mites can also live and feed outside the ear, causing itching elsewhere on the body. Suspect them if the inside of your cat’s ears look as if they’re lined with dark brown, bad-smelling coffee grounds and your cat is scratching like crazy at both ears or frequently shaking his head.

Because ear mites are spread by contact, kittens are especially likely to harbor the itchy foes, but any cat (or dog) can get them. Your veterinarian will diagnose ear mites by taking a sample of the discharge and examining it microscopically or using an otoscope to check for the presence of the white, pinhead-size mites. If one pet in your household has them, they’ll all need to be treated.

Treatment begins with a thorough ear cleaning and medication to kill the mites. Your cat may also need antibiotics if he has a bacterial infection from scratching the skin raw around the ears and something to kill any mites that have spread to other areas of the body.

Demodex cati lives normally on a cat’s skin, causing no problems unless an underlying metabolic disease such as diabetes or an immunosuppressive disease such as feline leukemia virus allows it to overpopulate. Cats with D. cati may experience itching, hair loss and tiny bumps on the skin known as miliary dermatitis. If signs are limited to the head, neck and ears, you might hear this condition referred to as localized demodicosis. This particular mite isn’t contagious between cats and may cause less itching than other mites. Managing any underlying disease helps keep it under control, but cats may also need a medication prescribed by a veterinarian to kill the mites.