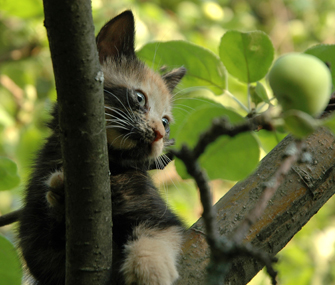 Q. Why do cats get stuck in trees? How can a cat lover get them out?

A. Cats have claws that are designed to take them in one direction: forward — or up, if that’s where they’re pointed. That’s why a cat can shimmy up a tree in mere seconds to get out of the way of whatever might be chasing him, such as a dog. If you were to watch in slow-motion, you’d see the claws anchoring the cat to the tree similar to mountain-climbing crampons (which probably take their inspiration from feline claws!), so the ascent is swift and safe.

Going Up Is Easy, Coming Down Is Not

But what goes up doesn’t necessarily come down easily. Going up is a breeze for cats; coming down can best be described as a series of awkward falls, hopefully none very far or very hard. Because the descent can be so scary, cats (especially young ones who don't know better) do get themselves stuck up high pretty regularly. Most come down on their own without anyone realizing they were ever up there. Others will cry and get everyone worked up and then come down on their own.

And what about the rest — the cats who wind up legitimately stuck in a tree? The days when the fire department would send out a truck to help are long behind us in most cities and towns. The most clever take on this particular slice of Americana, by the way, would have to be credited to Steven Martin in the movie Roxanne: The small town's volunteer fire department responds with ladders to a cat in a tree, but Martin, playing the fire chief, gets the cat down using a can opener — to open a can of tuna. Oh, and he gets the girl too.

Most cats will indeed decide to come down when they’re hungry enough. But on our Almost Heaven Ranch, I’ve twice had to save barn cats who refused to come down in a timely manner. Recently we were able to reach a stranded cat with a bucket truck (yes, I hired one!). The other time the cat was too high to get to that way, so I eventually decided that to save the cat’s life I’d have to chainsaw the tree. The cat was injured but survived thanks to prompt medical care. Lucky I’m a veterinarian, isn’t it?

If you think a cat — or any animal — is in trouble, call your local animal control officers. They're the ones best equipped to deal with any life-threatening situation. And who knows? In some towns they may even be able to sweet-talk the fire department into helping out.