What's the Deal With... Retractable Claws? 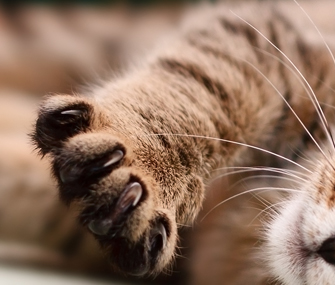 You may think that your kitty possesses those sharp talons solely to destroy your favorite armchair, but there are actually three main reasons why felines have retractable claws — and they’re all for survival purposes, says Dr. Cindy Houlihan, DVM, owner of the Cat Practice, in Birmingham, Mich.

“The first reason is for climbing,” she says. “Cats use their claws to grab purchase on trees or objects they’re trying to climb up or down on, so they don’t fall.”

They also use them for hunting — retractable nails make it easier to catch and grip prey.

Thirdly, “cats’ claws are their defense against larger animals who prey on them, such as coyotes, raccoons or hawks,” says Dr. Houlihan.

Now You See Them, Now You Don’t

That explains why they have claws, but why are they retractable?

“If cats weren’t able to retract their claws, they would get stuck to objects all the time — the carpet they’re walking on, tree branches they’re trying to slide down,” says Dr. Houlihan. “Their claws act almost like Velcro, so they’re there to use when they need them, and hidden when they don’t.”

So do kitties have control over those sharp nails?

“Absolutely,” says Dr. Houlihan. “Cats have very good control over their claws, but they also have an instinctual side that will take over when they’re in a dangerous situation or they’re frightened,” prompting the claws to come out.

How to Salvage That Sofa

“Cats scratch objects to calm themselves down and ease anxiety,” says Dr. Houlihan, debunking the notion that they shred upholstered furniture in an act of vengeance.

“They’re also trying to mark their territory by applying their scent with the glands on the bottom of their paws," she adds. "The destruction is an unfortunate side effect if their nails are long.”

To curb such damaging behavior, Dr. Houlihan suggests placing scratching posts in the same vicinity as a cat's favorite chair or couch — and then use positive reinforcement when the kitty scratches the post.

“Reprimands will only cause them more anxiety," she says, "which they’ll have to relieve by scratching your furniture more!”

For answers to other curious questions about animals, check out our other "What's the Deal With . . ." stories.