How Dog and Cat Whiskers Work 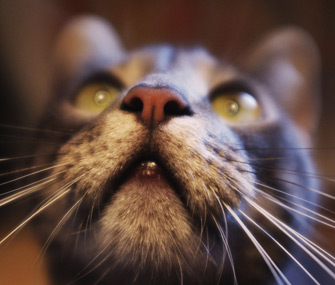 My friend Dr. Tony Johnson once told me about a woman who called to say she was bringing her dog into the emergency clinic where he worked because the dog had met up with a porcupine, and she was having difficulty removing the quills. When she arrived, he discovered that she had mistaken the dog’s whiskers for quills and had been pulling them out. Ouch! Can you imagine how much that must have hurt?

A dog's or cat’s whiskers are specialized tactile hairs, sometimes called sinus hairs or vibrissae. In both pets, they’re located on the muzzle, above the eyes and beneath the chin. In cats, they're also on the underside of the lower foreleg (carpal hairs).

Whiskers are amazing! They’re not just there for looks. The long, stiff hairs, which are thicker than normal hairs and tapered at the tips, aid a cat's or dog’s sense of touch.

Like other hairs, whiskers grow from follicles, which extend about three times deeper into the skin than the follicles of normal hair. Bundles of nerves at the base of each follicle make the whiskers exquisitely attuned to the surrounding environment.

These sensitive tactile organs can detect air currents, transmit complex information about the movement and position of prey, and even serve as a measuring device — if a cat's whiskers can fit through an opening, chances are the rest of her body will go through too. (That’s one of the reasons it’s important not to let your child or grandchild use a pair of scissors to play pretend groomer with a pet’s whiskers.)

Just as we use our fingertips to feel around in the dark, cats and dogs use their whiskers and the carpal hairs on the lower forelegs to sense objects that they might not see during a late-night prowl. The air stirred up by the animal’s movement bounces off surfaces, and the whiskers respond by bending slightly, signaling the presence of an obstacle. Whiskers also vibrate slightly as they touch a surface, transmitting information about the shape and texture of a surface or object.

Have you ever seen whiskers quiver? The specialized hairs are highly mobile. Cats and dogs can extend their whiskers out to the side and pull them back against the face. They extend them forward to determine where to place the killing bite when holding prey or to find and pick up items with the mouth.

Most whiskers are long and straight, but some cat breeds with unusual fur also have unusual whiskers, like Devon Rex and Cornish Rex cats, which often have short kinked or curly whiskers.

Never trim or pull out whiskers. The nerves at their roots are highly sensitive, and it can be uncomfortable for the animal to have them trimmed. Just say no if a groomer wants to trim them to neaten the face.

While there’s no scientific evidence that longer whiskers are better than short ones, I know from being a veterinarian for more than 30 years that clients who have cats with loooong whiskers love it when I say how much I love them. I have to believe that for some cats (and maybe dogs), having long whiskers is like having giant antlers. There just has to be some kind of “whisker envy” going on.

* What Does My Cats Skin and Fur Say About Her Health?