Surviving Your First 30 Days With a New Puppy 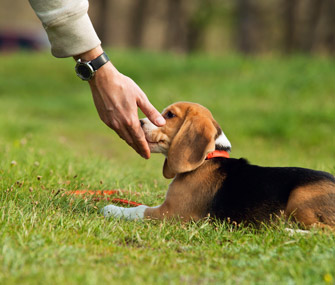 iStockphoto
The first two to three weeks after you take home a puppy is a good time to start teaching him basic commands like sit and down.


Depending on where you got him, his breed and his individual breeder, your pup is anywhere from 7 to 12 weeks old. That’s right during his critical learning period, when he is soaking up all kinds of information about the world around him and how he should behave in it.

This critical period lasts until he is 14 to 16 weeks old, so you may have as little as a couple of weeks to make the absolute most of this rapid learning stage. Of course, he’ll still learn afterward, but the things you teach during this time — good and bad — will really stick in his memory, so make sure it’s the right stuff. The goal is for him to have lots of positive experiences with friendly people, dogs and cats.


Meeting the neighbors, learning the sounds in your home and neighborhood, and going to the veterinarian for the first time are all part of your puppy’s socialization process. Once he's been with you for a week, it’s time to turbocharge his introduction to the world.

During his critical learning period, your puppy should meet at least 100 different people, not just the same 10 people over and over again. To get the numbers up, introduce him to the people delivering mail and packages and the gardeners in your neighborhood. Take him for short car rides and on errands, where you can take him into local businesses, such as the dry cleaners, a private postal service or an open-air shopping mall. (Be sure he potties outside immediately before you take him onto the premises, so he’s always welcome back.) If it’s a place where other dogs might go, carry him in a puppy sling or backpack or put him in a cart and don't expose him to other dogs until your veterinarian tells you he's had enough vaccinations. Take treats for strangers to give him.

Meeting new people and having lots of different experiences is important, because it gives a puppy broad experience to draw on later in life. A puppy who has met only middle-aged people or only your friends or neighbors doesn’t cope as well when he meets other types of people, such as young children, people wearing uniforms, people in wheelchairs or people from other cultures.

A little adversity during this time is good for your pup’s adventurous soul. Moderate amounts of stress during the socialization period can prepare a puppy to be ready for anything. Give him a change of elevation by putting him on top of a picnic table or clothes dryer, or surprise him with a toy while playing peekaboo. These simple things can help him become unflappable as he matures.

The first two to three weeks after you bring him into your house is a great time to start training him at home. You’re teaching him how to learn and developing a relationship with him at the same time — a real win-win! It’s easy to teach tricks, such as sit, down, come, high-five, roll over and more. You should also start to work with him on important commands like "drop it" and "give it," which not only improve his manners but can help to keep him safe.

Start looking for a good puppy kindergarten class as soon as you take your pup home. By the time he has typically had two sets of vaccinations — usually by 10 to 12 weeks of age — he’s ready to start school. Ask your veterinarian when your puppy is ready.

Puppy kindergarten classes offer socialization opportunities with other pups and people. The trainer can help you learn to teach your dog throughout his life. If you’re smart, you’ll never let learning end for your dog. Learning new things keeps his mind and body active and helps to keep him out of trouble.

Here are six things your puppy should be learning: