Home ›
Dr. Marty Becker ›
What Do Animals See in the Mirror?

What Do Animals See in the Mirror? 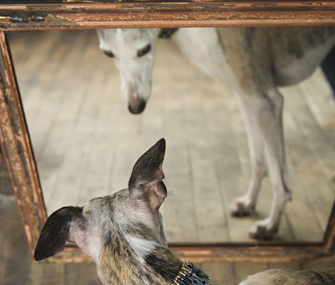 Q. Do pets recognize themselves in the mirror?

A. While many may think this common question is open to debate — or even a little silly — it’s actually neither. In psychology circles, the mirror test is considered an important evaluation of self-awareness in animals and a sign of the normal development of cognitive skills in children.

Humans are typically 18 months old before they are able to recognize themselves in the mirror. Among animals, currently only higher primates, dolphins, orcas, elephants and, surprisingly, European magpies are known to recognize that what they see in a mirror is a reflection of themselves. Even more interesting, perhaps, is that while pigs show no sign of recognizing their own reflections, they are able to use other information seen in the mirror, such as identifying the location of food placed behind them.

That doesn’t necessarily mean other animals aren’t intelligent enough to know when they run across other signs of themselves. The animals who “pass” the mirror test rely on vision as their primary sense. When a young cat or dog first sees his image in the mirror, he often reacts as if a strange animal suddenly appeared. But when the image doesn’t pass the “sniff test,” the pet generally decides to ignore it for good. Animals do recognize their own urine smell, however, as anyone who has ever walked a male dog knows. Checking “pee-mail” and hitting “reply all” with your own scented urine is a priority in any male dog’s to-do list.