How One Enterprising Boy Financed the Seizure Service Dog He Needs 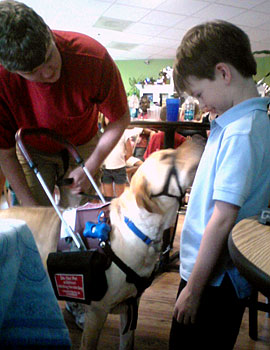 Eliza Hokanson
Evan won't get his own service dog until June, but he's making friends in the meantime.

For a 7-year-old boy, Evan Moss has garnered a great deal of success. This summer, he wrote, illustrated and self-published a book; got his name on a coveted Amazon best-seller list; and graced television screens across the country as a guest on The Early Show. Amazingly, Moss’ trajectory to celebrity started with a common childhood request: Can we get a dog?

But unlike most kids, the Alexandria, Virginia-based boy couldn’t simply go to his local animal shelter to find the perfect four-legged companion. Since birth, Evan has suffered from life-threatening seizures that stem from tuberous sclerosis, a condition that causes tumors to grow in organs throughout the body, including the brain. At one point, Evan’s mother, Lisa, estimates he was clocking 300 to 400 seizures a month.

Following surgery, Evan’s episodes came to a temporary halt, but then they started again. They now strike when he’s asleep, meaning that in addition to the 14 pills that Evan needs to take before bedtime, he also has to sleep with his parents, so his mother or father, Rob, can administer emergency seizure medication quickly.

Desperate for assistance — and much-needed healing rest — the family located an organization, 4 Paws for Ability, that trains dogs to assist people who suffer with seizures and in some cases, alert their owners or others that a seizure is coming on. There was just one glitch: The service canines come with a price tag of $22,000. To help offset the cost, the organization asked the Moss family to contribute $13,000. 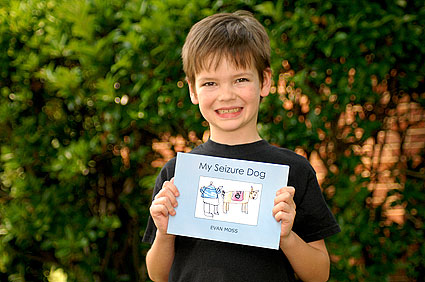 Courtesy of Lisa Moss
Evan shows off his best-selling book.

In order to raise funds for his pup, as well as awareness about the some 300,000 other children in the United States who could also benefit from seizure service dogs, Evan put pen to paper and chronicled what it would be like to have such a special companion in My Seizure Dog. “It took about three days to write my book,” Evan says. “My favorite part of making the book? When I ran out of ideas, I came up with really funny parts, like eating pizza with the dog and going to outer space together.”

Thanks to a sell-out book signing — 650 people showed up to support Evan and buy his $10 creation — and media coverage as far away as Istanbul, Turkey, Evan collected enough to cover his dog, with funds to spare. At last count, he’ll be able to donate an additional $41,000 to pair seizure dogs with other families. “I would really like to meet the kids I helped one day,” he says. “Maybe I’ll see them in training!”

Trained seizure dogs not only afford people who suffer from the condition with more independence, but they can also help keep their owners safe. According to the Epilepsy Foundation, “A response dog might be trained to bark when a child has a seizure so that family members know what is happening, or might lie next to someone having a seizure to keep them from harm, or might even be trained to activate some kind of pre-programmed device such as a pedal that rings an alarm. A seizure alert dog might go through a number of actions that are different from its usual activities if it senses that its owner is going to have a seizure. Pawing, running in circles, coming and sitting close by, even barking directly at the person have been reported.”

“Our hope is that the dog will also have the ability to alert us to a seizure even before it begins,” Lisa says. No one knows why some dogs are able to sense an impending episode, but some speculate that it may be a change in the owner's behavior or scent in the moments before a seizure that causes the dogs to respond. 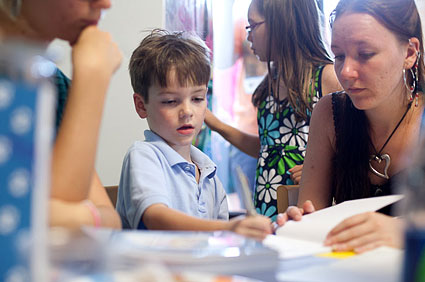 Jesse Snyder Photography
Evan at a book signing with his fans.

In the meantime, Evan eagerly anticipates the arrival of his new buddy next summer. Although this may seem like a long wait, it’s a necessary part of the process: It can take up to a year to properly train a seizure dog, and the organization had to secure a specific breed for the Moss family due to Lisa’s allergies. “Recently, People magazine photographed Evan with puppies from a litter of Labradoodles that his seizure dog may come from, so we may have already seen our dog,” Lisa says. “We are expecting to officially meet Evan’s dog in June, and we are all very excited!”

Until that day arrives, Evan and his family plan to keep fans in the loop on his progress through his blog, dog4evan.com. As invaluable as his canine keeper will be to Evan, the experience has also done wonders for him in other ways. “Through writing this book, Evan has made many new friends, and he has a lot of people supporting him across the country,” Lisa says. “He frequently has people tell him how proud they are of him, that he is their hero.”

Find out which pets are your best… ›
READ MORE: Dogs, Therapy Dogs