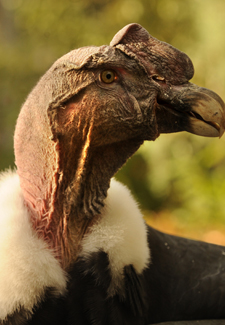 September 7 is International Vulture Awareness Day, and Helen Dishaw knows what you're thinking: Gross! Why a day for vultures? "I think they're probably one of the most misunderstood creatures out there," she says. "Even how we use the word — when you call someone a vulture, it's not meant to be a compliment."

Dishaw thinks very differently of vultures, and unlike most people, her opinion is based on personal experience: She works with five different species at the Tracy Aviary in Salt Lake City.

"They do no harm to any other living creature," she says. "They spend their entire lives basically cleaning up messes and making the world a healthier place for anything that shares the environment with them. We could all do a little more of that."

Vulture Day hopes to raise awareness of the fact that vultures are in big trouble in some parts of the world. Dishaw told us about why they're important and why even some of the things that are kind of gross about vultures are really quite cool.

1. Vultures have interesting adaptations for digging into their diet of carrion. One is their bald heads. "I tell kids it's like if you stuck your head in a plate of spaghetti and then tried to clean that out of your hair," she says. "It would be disgusting! But if you had a bald head, you could just wipe it off."

2. Another adaptation is their stomach acid, which allows them to eat meat that would make us sick. "Their stomach acid is almost comparable to battery acid," Dishaw says. "They can withstand a hundred times the amount of botulism that humans can."

3. It's a misconception that they actually prefer their food rotten. "People ask us all the time how long we have to let the meat we're feeding the vultures sit out," she says.In fact, what they're fed in the aviary is at least as fresh as what you buy in the store. "They can eat things on the verge of spoiled, but the reality is that they prefer their meat fresh just like we do," Dishaw says. "They're so good at finding carcasses that they usually find them and clean them up before they get to that stage of being super decayed."

4. Nothing goes to waste with a vulture. They even make good use of semi-digested and digested food. Turkey vultures will regurgitate around their nest site, Dishaw says, because they've learned that the stench is off-putting to nest predators. Vultures will also regurgitate food to get away from a predator quickly."They're going to want to use their best defense, which is to fly away, and a full stomach inhibits that," she says. "So they'll regurgitate and take off." 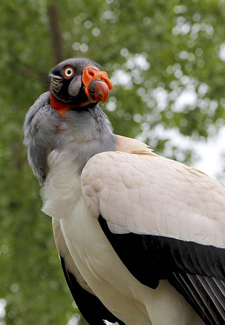 5. Some also make good use of another bodily fluid: urine. New World species urinate on their own legs. It's thought to have an evaporative cooling effect, and while it may seem icky, Dishaw notes that cooling off isn't necessarily pretty for some other species: "I don't think sweating is exactly the most attractive bodily function either!"

7. Most birds rely on sight and sound rather than smell for sensing their environment, but some of the New World vultures have a keen sense of smell. In fact, the turkey vulture has one of the best senses of smell in the animal kingdom. They can find hidden carcasses by detecting the methane gas that's a product of decomposition — and this turns out to be one way they benefit humans: "They've used turkey vultures to detect leaks in cross-country gas lines because they'll circle above them," Dishaw says.