10 Things You Didn't Know About Cows 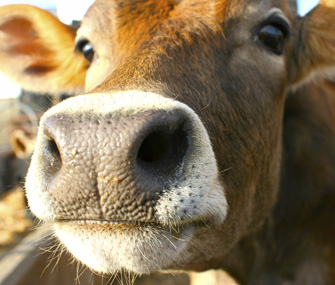 It’s Cow Appreciation Day, and while we know that you value bovines for helping to create your favorite ice cream (especially in this weather!), there's more to this farm animal than just a bovine's ability to produce milk. “Cows are excellent recyclers,” says Dr. Mark Alley, DVM, a professor of bovine health at North Carolina State University. “A lot of byproducts in the manufacturing of things like beer, candy bars and potato chips, which would otherwise end up in landfills, are actually an excellent feed source for cattle.”

Bet you didn’t know that, did you?

Here are 10 other little-known facts about the gentle creatures:

1. The term “cow” refers only to the females of the bovine population. Males are typically called bulls or steers.

2. Cows have almost panoramic, 360-degree vision, allowing them to watch for predators or humans from all angles. Translation: It’s nearly impossible to sneak up on them, would-be cow tippers.

3. Bovines can’t see the color red. Those crimson flags that matadors wave in the rodeo ring only catch a bull’s attention because of their fluttering.

4. Cows have an acute sense of smell and can detect odors up to six miles away, which is also helpful in detecting imminent danger.

5. These mammals have no upper front teeth. Instead, they press their sharp bottom teeth against the top hard palate of their mouth to cut efficiently through blades of grass.

7. Thanks to a high metabolism, the average dairy cow consumes more than 100 pounds of food per day and drinks up to 40 gallons of water per day.

8. These extremely social creatures don’t like to be alone. So if a cow isolates herself, she's either not feeling well or she's about to give birth.

9. Cows spend the vast majority of their time lying down — about 10 to 12 hours each day.

10. In India, you can go to jail for killing or injuring a cow. Hindu nations believe that cows are holy and should be esteemed — not eaten.