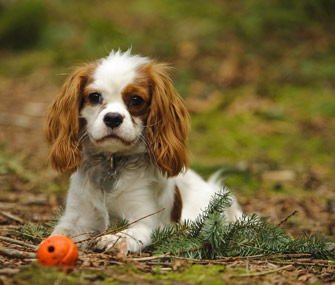 Tara Gregg, Animal Photography
Cavalier King Charles Spaniels may be small, but they usually enjoy playing fetch just as much as their bigger Spaniel cousins.

The Cavalier King Charles Spaniel is quite noble: He’s a re-creation of the Toy Spaniels often found in Europe’s royal courts from the 15th to 19th centuries. He can be a good companion dog and has become increasingly popular. Learn more about this Toy breed and whether he might be the right dog for you.

The Cavalier often has the same “birdy” nature as his larger Spaniel cousins. He often enjoys playing fetch and flushing birds. However, because of his chasing instincts, it’s important to always walk him on a leash, so he doesn’t run into the street after a ball or disrupt theneighborhood birds.


They generally get along with children.

Generally a family-friendly breed, the Cavalier tends to get along with kids and can do particularly well with older children who will throw a ball for him, teach him tricks or just hang out with him. Although the Cavalier is one of the larger Toy breeds, typically weighing between 13 and 18 pounds, he’s still small enough that he should be protected from toddlers who might fall on him or pet him too hard.

All About the Cavalier King Charles Spaniel

They’re a favorite breed among celebrities.

They tend to be easygoing.

The typical Cavalier tends to be loving, trusting and a friend to just about everyone he meets. However, some Cavaliers can be hard-charging or even have a stubborn streak.


They tend to be adaptable.

Hanging out on the couch? The Cavalier will probably be happy to chill out on your lap. If you’re ready for action, he likely will be, too. He can be flexible that way.