5 Tips on How to Stop a Dog From Pawing 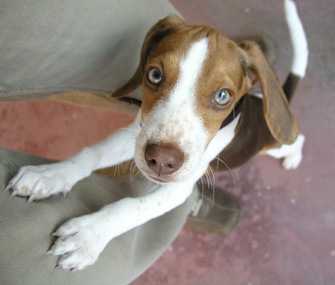 Q. My large dog uses his paws to get our attention and accidentally hurts us sometimes. What can we do to discourage this behavior?

A. Pawing and scratching is a tactic dogs use to garner attention, ask for something they want, or as part of play.

My parents have a 12-pound Pomeranian mix named Quixote who is the pleasure pig of all canines. Despite his small size, he takes on a demanding role when it comes to tickle time. He uses his claws to scratch a leg or foot until someone uses that foot to scratch him back. If he wants to be tickled on his tummy, he curls his paw around an arm like a hook and drags that arm toward his belly. My mom calls Quixote "the Velveteen Rabbit" because she claims he's been rubbed so much, his hair is going to fall off. Despite my efforts to help Mom nix her dog's bad habit, she takes on the responsibility of part-time masseuse for her canine without complaint, and proudly wears the tic-tac-toe marks from Quixote's claws on her skin.

But there's reason to discourage such behavior. Pawing and clawing of hands for attention can move beyond a nuisance and become a serious problem, especially as the size of the dog increases. Pawing can cause severe skin injuries, especially to those most vulnerable, like young children and the elderly, and a large pawing dog can trip someone or knock her over.

The behavior can be improved with training, in particular by replacing the scratching with preferable alternatives. Here are my go-to ways to stop pawing that work with pint-sized to pony-sized canines:

Pawing is often used to get a person's immediate attention, much like a young child may poke his mother repeatedly and say, "Mom, Mom," until he gets attention or is given a privilege like being let outside or getting a toy. My grandmother's dog, a Shih Tzu named Shing-I, trained my grandma to act like a vending machine. Every time she paws Grandma's leg, Grandma reaches into a treat bag by her chair and delivers Shing-I a tasty morsel. My grandmother insists that Shing-I's treat demands are adorable, and she doesn't care to change. But change is entirely possible by replacing the scratching with a desirable behavior. In the case of Shing-I, if my grandma interrupted the scratching sequence by asking for one of the dog's trained behaviors, like sitting. Before she reached Grandma's leg to paw, Shing-I was rewarded with a treat from Grandma. Then she could ask for a series of other tricks, such as lying down, until the opportunity to earn treats ended, at which point she could use the cue, "All done." The preferred behavior to be trained depends on each circumstance; for example, a dog could be taught to use a potty bell — a bell that he rings when he has to go out — instead of pawing to be let outside.