5 Ways to Get Your Dog's Zen On 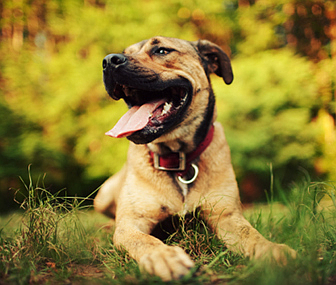 As spring gets underway and the dogs come out to play, you may be looking for a new strategy or two to keep your pup calm and content. Nothing beats the old saying “a tired dog is a happy dog.” And as the days lengthen, you’ll have more sunny hours for cavorting — and exercising — outdoors with your pup. But here are five other ways to help your dog get his mellow canine Zen on.

Rather than just scoop kibble into a bowl a couple times a day, introduce a food-dispensing toy, like a Kong or a Kibble Nibble. By playing while eating, dogs get a mental workout, while also sating their physical hunger — and they need both activities to be truly satisfied.

In addition to basic consumption (chewing and swallowing food), there’s also the appetitive angle, which is the hunting and foraging that are part of a dog’s natural feeding pattern. “By feeding in a bowl, we don’t satisfy the appetitive behaviors,” says Dr. Malamed. “With [toys], dogs can use their brains . . . any kind of play reduces stress.”

While there are no dog foods that are clinically proven to boost serotonin or other such neurotransmitters, protein levels may have an influence on mood. “There is some indication that very high protein [foods] may contribute to aggression,” notes Dr. Elizabeth Stelow, DVM, a clinical animal behavior resident at the University of California Davis William R. Pritchard Veterinary Medical Teaching Hospital.

Although there's little information available, some studies have suggested that high-protein foods may contribute to some — but not all — types of aggression. However, aggression should never be treated with dietary changes alone, and you should always consult with your veterinarian first. Low-protein diets should be used with caution, especially when it comes to growing puppies and pregnant or nursing dogs.

Nursing female dogs naturally emit a comforting pheromone. Thanks to the wonders of the lab, synthetic dog-appeasing pheromones (DAP) can now imitate these chemicals. While humans can’t smell them, dogs detect these pheromones and feel reassured and happily mellow.

DAP is easily found in all sorts of over-the-counter applications, such as room diffusers, sprays and even infused collars. “DAP works on some dogs, but not on all,” clarifies Dr. Malamed. “But the nice thing is that it doesn’t have any side effects.” Dr. Stelow calls DAP a “can’t hurt, might help” tool.

Perfuming a room with an essential-oil diffuser, spritzing a lavender spray near a dog’s crate or rubbing a little bit of scented oil on a dog’s blanket can give them a whiff of serenity. Just remember that a little bit of essential oil goes a long way!

A well-known study by animal behaviorist Dr. Deborah Wells, Ph.D., pinpoints classical music as the most calming sound for your dog. When Dr. Wells compared heavy metal, pop and classical music, she found that dogs responded most positively to classical tunes — while rock music, not surprisingly, sparked canine agitation.

Heather Beck, a Utah-based certified trainer and the founder of K9 Lifeline, noticed that dogs in her kennel would quickly relax whenever she played slow music that was especially designed for dogs.

“The dogs who were closest to the speakers would be so relaxed, they’d pass out!” she says, laughing. “We started putting the crazier dogs closer to the speakers, and they’d be asleep in five minutes.”

The gentle albums produced by Through a Dog’s Ear have become best-sellers. Another option is the online easy listening station Dogcatradio.com.

Put on Some Gentle Pressure

Pressure wraps, in the form of shirts and coats, are often touted for dogs who are afraid of loud noises or storms. But the snug layers can also work well as a general soothing device. Dr. Malamed compares them to swaddling blankets, which are commonly wrapped around newborn babies to give them a sense of security and well-being.

Popular pressure garments for dogs include the Thundershirt, the Storm Defender and the Anxiety Wrap. The latter claims to use acupressure points to lower stress.

“We use [pressure garments] quite a bit,” says Beck. “They help to lower anxiety. It goes back to the kind of pressure that dogs' moms would have applied. As soon as a mother picks them up, they calm down. The jacket does the same thing. And you don’t need a storm to use it.”