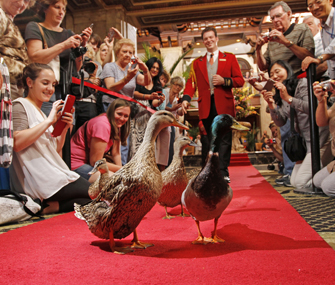 Nothing makes us feel more at home than cuddling up with an animal companion. At these seven vacation getaways, resident animals have become an integral part of the operation, welcoming guests and even pitching in to help make a pending marriage proposal highly memorable.

Nobody does Southern hospitality quite like the ducks at The Peabody Memphis Hotel — not even Elvis “The King” himself. This Tennessee retreat takes its five Mallards very seriously: For 70 years, the property has had an onsite Duckmaster, who feeds and trains the creatures. (Honorary Duckmasters have included Oprah and Joan Collins, to name a couple.) The ducks spend the bulk of their time in a Duck Palace on the rooftop, which includes a scale replica of the hotel. Every morning, the Duckmaster leads them down a red carpet to the lobby’s fountain, where they splash and swim. At 5:00 P.M., they’re marched back upstairs to their private digs.

Some people go to Sonoma for the wine. Others are all about the cats. At least, that’s the case at the Farmhouse Inn, where the barn rooms are high-end country chic, and the in-house restaurant is Michelin-starred. The family-owned hotel acquired its first two feline mascots accidentally, when a couple of feral cats showed up and started to mouse the property. Once they passed away, the owners called a local kill shelter and rescued two kitties. One of them, Charlotte, greets all the guests — but really gravitates toward those who clearly like cats. The inn's newest addition, Jasper, arrived only a few months ago, but he's already clawed his way into everyone’s heart.

Most people associate penguins with cold weather, but visitors to the Hyatt Regency Maui Resort & Spa on Kaanapali Beach know better: African Black-Footed Penguins hang out amid the lush greenery and bronze sculptures in the hotel’s expansive, open-air lobby. The hotel also has another winged mascot: a blue-and-gold Macaw named Roger (by the way, this bird is a female — oops!) who chats up guests — especially blonds — and loves to dance.

It's just a 90-minute train ride from New York City, yet the Buttermilk Falls Inn & Spa is the epitomy of a bucolic paradise. Not only does the property’s working farm supply the spa and restaurant with herbs and produce, but the staff also raises chickens (for eggs), peacocks, goats — and rescued llamas and alpacas. Before the recession, it was trendy to raise such critters in the region, but once the economy tanked, many of these animals became a casualty. So Buttermilk Falls’ owner, Robert “Bob” Pollock, stepped in and adopted some of the llamas and alpacas. They’re sheared annually, and Pollock is now in talks with an artisan group to use the wool for weaving. In the meantime, two adorable babies have been born for guests to coo over.