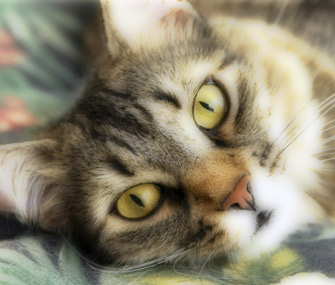 Thinkstock
Did you know that cats have the largest eyes of any mammal relative to their size?

Perhaps owing to the species evolutionary history as desert dwellers, a healthy cat's kidneys can create extraordinarily concentrated urine. This allows her to conserve as much moisture as possible from the food she ingests. It's also one of the reasons your vet is so interested in your cat's urine when she is sick: It contains a lot of information about the state of your cat's kidney health.

Cats possess multiple sensory qualities that help make them agile predators, but their eyes are the feature that’s most enchanting. You’re not just imagining that wide-eyed look: Cats have the largest eyes of any mammal relative to their size. Their slit pupils can open wider, close smaller and change size faster than the circular pupils of many other mammals, allowing cats to see better in different levels of light. In addition, their night vision far exceeds our own. Cats can see with only one-sixth the amount of light humans can for two reasons: They have more rods in their retinas than we do, and they have a tapetum lucidum, which is a reflective layer of tissue at the back of the eye that creates that eerie glow so many of us wake up to in the dead of night when our cat is staring at us from across the room.


7. Cats smell with their mouths.

The vomeronasal organ, also called the Jacobson’s organ, is an olfactory structure located between the hard palate and nasal septum. The vomeronasal organ is used to analyze pheromones, which is an important way cats communicate. You may have observed your cat making an unusual grimace or sneer after taking a deep inhale of an odor. A kitty's sneer is known as a flehmen response, and it’s how the cat directs particles to the vomeronasal organ for analysis.