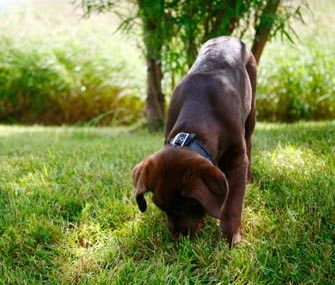 Q. We're bringing home a new puppy. Do you have any suggestions for house training?

A. Patience is key when it comes to housebreaking because every pup will pick up the process at his own pace. And unless a dog is taught where to eliminate, he'll look for any spot that's convenient and safe, which often ends up being the carpeting! Unfortunately, dogs aren't born with the moral reasoning to understand that going to the bathroom inside the house is wrong.

Since dogs innately want to keep their personal area clean, they will venture away from their own territory to use the bathroom. But many owners make the mistake of giving a puppy too much space too fast. In this case, the dog has little incentive to wait to go outside, since his personal roaming space only makes up a small portion of the home.

It's best to use confinement to teach your dog that he has to wait to go to the bathroom outside the house. You can do this by purchasing a crate, so the puppy has just enough space to turn around and lie down. Another alternative, if possible, is to keep the puppy by your side at all times while clipped to a four- to six-foot leash.

Puppies are most likely to use the bathroom within 15 minutes of eating, drinking, playing, exercising or waking up from a nap. After any of these activities, your puppy should be given an opportunity to go to the bathroom.

A general rule of thumb for how long puppies can hold their bladders: one hour for every month of age, plus one. So if a puppy is two months old, he can wait up to three hours. However, this varies from dog to dog, and a puppy should be taken out more often than his maximum hold time. I train owners to take puppies out to the bathroom every one to two hours or after any activity that stimulates elimination.

It's important to consult your veterinarian if your puppy seems to have difficulty holding his elimination for reasonable amounts of time for his age, because this could signal a medical problem.

When it’s time for a bathroom break, take your puppy outside to the same proper elimination area each time. If he goes to the bathroom within five minutes, praise him and offer treats as soon as he does his business.

Don’t take your puppy immediately back to his confinement area, which can actually read as punishment to him. Instead, opt for a 10-minute block of supervised play in a bigger area before putting him back in the confined space. However, if your puppy does not eliminate outside, calmly place him back in his confinement area, wait 15 minutes and then try again outdoors.

Never punish your puppy if he has an accident in the house. This only teaches the dog to fear the idea of going to the bathroom when people are around, and he will likely still go in the house — just not when his owner is looking. Instead, if you catch your puppy in the act, you can interrupt him with an “oops,” and immediately take him to his proper elimination area outside.

Consider using enzymatic cleaners on any potty spots to keep your dog from smelling previous accidents and going there again.

As your puppy stays accident-free in the confined area, you can gradually expand his space privileges by introducing him to a new room. After one week of success without accidents, open up yet another area of your home.

However, if accidents start happening, confine him back to the previous level of success. And keep to his regular schedule of bathroom breaks, rewarding for proper elimination, throughout the entire training process.

During the night, you may need to take your puppy outside multiple times. Don’t push your puppy to hold his bladder past the limit for his age or individual ability. If accidents happen at night, it’s critical that you take him out more often — the more a dog messes in his personal space, the more comfortable he will become with lying in his filth, making housebreaking difficult.

Although dogs can be transitioned away from them, it makes the house-training process more complicated. I often see canines who are trained to go on pads as puppies, but they're not allowed to do so as adults, which only leads to confusion and accidents in the home.