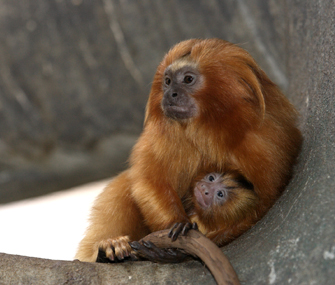 Photo by Mehgan Murphy, Smithsonian's National Zoo
The National Zoo in Washington, D.C., has been instrumental in helping the endangered Golden Lion Tamarin.

At the zoo, you get to spy creatures that you'd otherwise never see. But zoos are more than just fun places to visit — without their dedicated conservation efforts, some animals would be lost to us forever.

These eight zoos across the country have been instrumental in saving certain animal species from the brink of extinction.

The Arabian oryx was long hunted in the deserts of the Arabian Peninsula, but with the introduction of more effective modern hunting techniques, their numbers began to decline considerably in the mid-20th century. In 1962 an expedition to capture three of the last remaining oryx helped to start a breeding program at the Phoenix Zoo in Arizona.

In 1972 the species was declared extinct in the wild, but the first captive-bred animals were released back into their natural habitat in 1981 — and now there are over 1,000 of them in the wild.

Operation Oryx was one of the earliest efforts to save a species from extinction, and according to Stuart Wells, director of conservation and science for the zoo, the first to reach one major milestone: In 2011 their conservation status improved from "endangered" to "threatened," which is the first time that this has happened to a species previously declared extinct.

These striking little orange monkeys are threatened by the destruction and fragmentation of their Brazilian rainforest habitat.

In 2003, due to successful captive breeding and reintroduction, their status improved from "critically endangered" to "endangered."

Some of the captive-bred critters got practice living relatively "wild" in a program hosted at the National Zoo in Washington, D.C., where they had free range of the grounds in the summer.

In 1975 the wild population of the Puerto Rican parrot was down to just 13 birds.

Part of the problem is that the parrots are particularly vulnerable to hurricanes: When careful protection had the wild population up to 47 in 1989, more than half were wiped out by Hurricane Hugo.

Today, thanks to the efforts of zoo scientists at the Lincoln Park Zoo in Chicago, captive-bred birds at two aviaries number over 200 — and reintroduction is underway. Some 60 wild and captive-born Puerto Rican parrots now live free.

It's not just cuddly and feathered animals that need our help: Freshwater mussels are threatened by habitat loss, pollution and competition from invasive species, which is why some of these mollusks are on the federal endangered species list.

The Columbus Zoo in Ohio has a facility dedicated to propagating mussels — and has released thousands of the mollusks, which are even tagged with transponders for tracking in the wild.