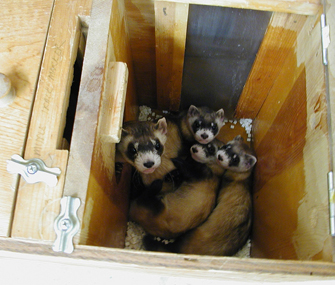 The black-footed ferret was believed to be extinct in 1979, until a small population was found in Wyoming in 1981. But the good news didn't last long: Their numbers began to decline rapidly due to disease, so the remaining ferrets were captured to begin a breeding program.

In 1991, captive-bred ferrets were released into the wild — and they've since been successfully reintroduced in at least four locations that were part of the species' original range.

One participant in the breeding program, the Cheyenne Mountain Zoo in Colorado, has released over 203 captive-born ferrets. Dr. Della Garelle, the zoo's director of conservation, says that some are born with the aid of advanced technology, including artificial insemination using frozen semen to help preserve the species' genetic diversity. "Ferrets that have been dead for 20 years have fathered young," says Dr. Garelle.

Due to habitat destruction, poaching and even lead poisoning, only 22 California condors were left in the wild by the late 1980s.

So the remaining birds were brought into captivity to found a breeding program in conjunction with the San Diego Zoo in California. One novel technique that scientists used to breed the birds in captivity: condor hand puppets, which handlers wore to feed the baby birds.

In the early 1990s, conservationists began to release some of the California condors into the wild — and there are now over 200 flying free.

The Kihansi spray toad wasn't even discovered until a project put it at risk of extinction. In the 1990s, construction started on a dam in the Kihansi Gorge of Tanzania. Environmental surveys found the amphibian, which only existed across a four-hectare area in the spray zone of the waterfalls.

"The gorge was covered in cloud mist, and that was their habitat," says Andy Odum, curator of herpetology at the Toledo Zoo in Ohio, which has been instrumental in saving the toads.

In 2000 several hundred toads were taken into captivity and sent to facilities in the U.S., including the Bronx Zoo in New York City. It was a good thing too, because the last toad was seen in the wild in 2004.

"A couple of years ago, we started to send animals back to Tanzania," says Odum. "And the great news is that the first reintroduction experiments are going on. I'm very optimistic."

Once found widely across Europe and Asia, the Przewalski horse was declared extinct in the wild in 1970.

The National Zoo in Washington, D.C., participated in a program to breed the handful that remained in captivity, and in the 1990s, they were reintroduced to their native habitat in Mongolia.

Several hundred now survive in the wild — in 2008 they were reclassified from "extinct" to "critically endangered."