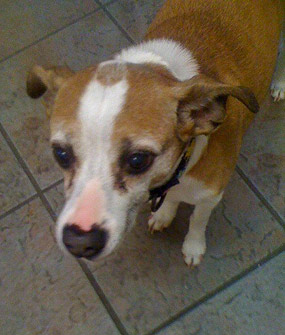 Old Man Doug did not go quietly into some random night. Instead, he waited until the whole family was gathered for the holidays, and then, with much less ado than I would have chosen, he took his final bow at age 18. That he chose Dec. 25 confirms my belief that he wanted to assure his place in family history, and make sure it was timed so he didn’t have to be anywhere near the post-holiday decoration take-down he so despised. His exit was dignified and sad beyond all words. And yet, the old fellow was always happiest when we were all together, in one room, even if we were sobbing into his furry neck as we said our goodbyes.

In fact, it was because he didn’t rouse himself from his bed to join all of us for the holiday festivities that I had to cross off the final criteria defining his quality of life. He already had ceased eating for pleasure, turned his old gray face away from his favorite treats, hated his walks and couldn’t get comfortable in his bed. I made little nests using his favorite blankets and comforters, and placed them all over the house to tempt him out of his restless slumber, to no avail.

Still, when it was clear he would not be planting his creaky, leaky self in the middle of family and friends and savory smells wafting from the oven, it seemed to be his final message. When he contracted a vicious intestinal virus, he was already so weak he never had a chance. The vet at the 24-hour emergency clinic joined us on the floor where we had practically sunk to our knees with the grief of it all. She talked in a calm, soothing voice where she may have listed options and discussed potential end-of-life treatments, but what I heard was that she was sending us home to come to a consensus while she kept him hydrated and sedated. It was Christmas Eve.

People say it’s hard to know the right time, or that your vet will guide you through the decision-making process. You are told to count his good days versus his bad days — and that’s where the whole thing falls apart, because we don’t know what a good day is for a dog. I know he did not make the adjustment from country dog to city dog very easily.

When we pulled up in front of our small townhouse in our new big city, Doug lifted his head from the back seat and gave me one of his looks that said, “Are you freaking kidding me?”

Doug never cared much for change. Throughout his long life, he grieved piteously when subjected to any disruption of his routines or loss of his loves. His greatest sorrow was the passage of each of his girls from their childhood home to college. And while he was wildly excited when they returned, he knew better than to get too attached again. A heart can break only so many times.

On the last day in Alabama, we made a painful journey through town, saying goodbye to all of his favorite haunts. We moseyed over to the lake where I reminded him of the boat trips and booze cruises we took over the years. He sniffed the trees at the University of Alabama quad where certainly there existed some squirrel grandchildren who knew him by his once fearsome reputation. It was most wrenching to leave the beautiful young women who grew up with Doug the Dogand their own beloved pets: Max, CiCi, Buddy, Millie, Harry, Gracie and Abby.