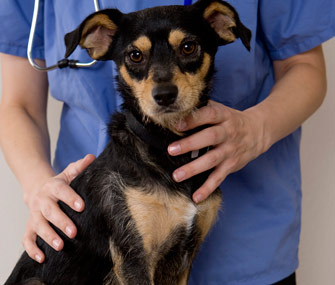 There is some exciting news on the battlefront against pet overpopulation — a medication is hitting the U.S. market that is used to neuter male dogs without the need for anesthesia or surgery.

Used for the past few years in Mexico, Colombia, Bolivia and Panama (under the name Esterilsol™), Zeuterin™ is expected to be available in the United States within the year. Current FDA approval is for use in dogs between 3 and 10 months of age, although expansion of approval to all dogs over 3 months is anticipated by the end of 2012.

The active ingredient in Zeuterin™ is zinc gluconate, which is the reason the use of this product is also referred to as “zinc neutering.” Within 30 days of administration, Zeuterin™ induces sterility. Only one treatment is required and no hospital stay is necessary.

Zeuterin™ is injected directly into each testicle without the need for anesthesia, although frequently, mild sedation is used. Now, before you cross your legs and mutter, “Yowza,” the manufacturer reports that 97.5 percent of dogs studied showed no outward evidence of pain during the procedure. Apparently, the combination of using a very small needle and a very slow injection of the product avoids triggering any sensation of discomfort. Post-procedure complications such as pain and injection site reactions occurred in only 1.1 percent of treated dogs.

Within 30 days of administration, Zeuterin™ induces sterility by causing permanent, irreversible scarring of the dog’s testicles. While the testicles eventually diminish in size, they still remain visible. Because of this, any dog who is neutered with Zeuterin™ is marked with a small tattoo in the groin area so that owners, veterinarians and animal shelter personnel can tell that the animal is neutered.

The Pros and Cons

For people who cannot fathom the thought of their dog living without testicles, Zeuterin™ may be the solutionbecause the organs remain in place after sterilization. On the other hand, if the primary goal of neutering is elimination of negative male behaviors such as roaming and aggression, surgery may still be the procedure of choice. Zeuterin™ does not completely eliminate testosterone production within the testicles, although it does reduce it by up to 50 percent. Surgical neutering drops testosterone production to zero.

Zeuterin™ may be a real boon for animal shelters and sterilization clinics in their fight against pet overpopulation. Proponents believe chemical neutering is safer, simpler, less time-consuming and cheaper to perform than traditional surgery, meaning more dogs potentially can be neutered with available shelter resources.

Is chemical castration likely to replace traditional surgical neutering in our population of pet dogs? I have no clear prediction, but I am certainly interested to see how the answer to this question unfolds.

Would you consider chemical rather than surgical neutering for your male dog?

Dr. Nancy Kay graduated from Cornell College of Veterinary Medicine and is the author of Your Dog's Best Health: A Dozen Reasonable Things to Expect From Your Vet and Speaking for Spot: Be the Advocate Your Dog Needs to Live a Happy, Healthy, Longer Life. Dr. Kay is a specialist in small-animal internal medicine at Upstate Veterinary Specialists, with offices in Asheville, N.C., and Greenville, S.C.