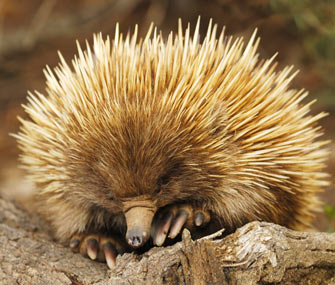 At first glance, the echidna looks like an enormous mutant hedgehog, but the two animals are not related. The echidna's closest relative is actually the duck-billed platypus. And that's only the beginning of the unusual traits this animal displays! We spoke to the folks at the Pelican Lagoon Research & Wildlife Centre in Kangaroo Island, South Australia, who provided us with the following fascinating facts.

Echidnas and Their Young

The echidna is a mammal, but it lays eggs. That's right: It has fur and feeds its young on milk but lays eggs. The echidna and platypus, who make up the group called monotremes, are the only mammals who do this.

The echidna lays her egg into a pouch. It's not a permanent pouch like a kangaroo has but a pseudopouch that develops before egg laying.

The egg hatches after 10 days, and then the baby — called a puggle — lives there for about 50 days until it starts growing spines (ouch!), at which point the mother digs a nursery burrow for it.

Although they produce milk, echidna females don't have nipples. The puggle stimulates the production of milk from an area called the milk patch, which has special pores.

No, They're Not Related

Echidnas are sometimes erroneously called spiny anteaters. They're not related to other anteaters, but they gather their food in a similar way: They use their long, sticky tongue to get insects out of their nests. The Latin genus name for the short-beaked echidna, Tachyglossus, means "fast tongue."

Echidnas don't have teeth, but they do grind up their food against the roof of their mouth, unlike anteaters, which swallow it whole.

Echidnas don't look very athletic, but they're far from stationary. Their home range can be as large as 200 acres.

Echidnas and platypuses have the lowest body temperature of any mammal, from 86 to 90 degrees Fahrenheit.

The private parts of echidnas are rather unusual. They have a cloaca, like birds and reptiles: one multipurpose orifice for poop, pee, egg laying and fertilization. However, the males do have a penis, and it's a strange one: It has four little heads. Copulation can last from 30 minutes to two hours.

How Well Do You Know Snakes?