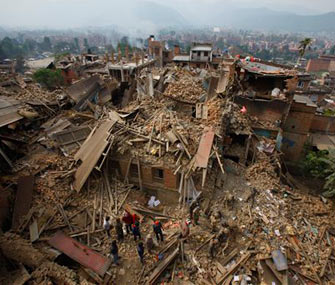 A massive 7.8-magnitude earthquake struck Nepal Saturday, killing at least 4,000 people — and the death toll is continuing to rise. World Vets activated its disaster response team to help animals in the devastated nation Monday. The rapid response veterinary team will be in Nepal for at least three weeks, providing field rescues and supporting local animal welfare groups that are taking in animals. Other animal rescue groups including the Humane Society International and the International Fund for Animal Welfare say they’re also ready to activate. Scores of pets are feared dead in Nepal, according to the International Business Times. Meanwhile, an elite team of search and rescue dogs from the U.S. has been deployed and was expected to arrive in Nepal Monday. The rescue groups are accepting donations for their work. You can donate here: World Vets | HSI | IFAW