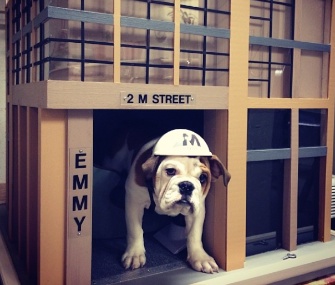 2mpup / Instagram
Emmy has her very own model of the 2M apartment building she lives in.

It wasn’t just the rooftop pool, the indoor basketball court or the 24-hour concierge that made Mara Pillinger want to sign a lease at 2M, a new apartment building in Washington, D.C.

Rather, one wrinkly, adorable four-legged tenant was “95 percent of the reason I moved in,” says Pillinger, a 29-year-old Ph.D. candidate in international relations at George Washington University.

“I spend time with Emmy twice a day every day — it’s study breaks,” says Pillinger. “I just go in and plop down on the floor and play with her.”

Emmy lives with the building’s property manager, Doug Crawford, full time. He cares for her and takes her to all of her veterinary and grooming appointments. But Emmy spends her days hanging out in the office and is available when residents want to come play with her, either in the office or in the building's courtyard, which boasts a private “pet park.” (Emmy is only allowed to leave the building with Crawford or other members of the office team.)

Assistant property manager Kaitlyn Luper says at least one resident a day comes by to take the pooch for a walk in the pet park.

Pillinger first heard about the building when her friends sent her news stories about the communal dog.

“A lot of our residents either saw information on Emmy through various media outlets or met her when they toured the building,” says Luper. “While it might not be the deciding factor for them to move into 2M, she has definitely given the building a lot of attention.” 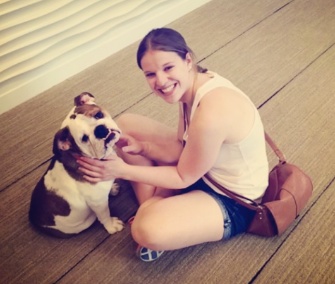 For Pillinger, Emmy provides the perfect balance of enjoying the company of a dog without the responsibility of caring for her own pet while she’s busy with her studies.

“She’s the sweetest thing ever. She’s always happy to see you, always wants to play. She’s always sort of puzzled when she’s not the center of attention — not that that happens very often for her,” Pillinger laughs.

Like Pillinger, new resident Carolyn Belcher, 22, would like to get a dog of her own someday. But she and her boyfriend just moved to the area from North Carolina and know it will take a while to establish their schedules so they know they’ll be home to take care of a dog.

When her boyfriend’s brother told them about Emmy, they thought a building dog was the next best thing.

“It’s kind of nice because it’s like having a dog without having to take care of a dog every day,” Belcher says. “So you have all the benefits of the dog without all the responsibility.” And if Belcher and her boyfriend decide to get a pet of their own, their new addition will be welcome in 2M's pet-friendly environment.