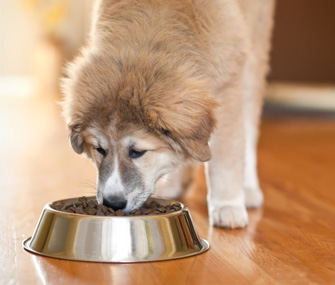 In veterinary school we learned that cats are carnivores; horses, rabbits and ruminants are herbivores; and pigs and dogs ­­— like people — are omnivores.

But at a nutrition conference I attended earlier this month, an audience of 300-plus nutrition researchers and veterinary professionals was treated to a strong argument in favor of dogs as carnivores.

Urging us to rethink the “dogma” of dogs as omnivores, Dr. Wouter Hendriks of Utrecht University’s veterinary school in the Netherlands laid out a detailed and ultimately convincing argument in favor of canine carnivorous-ness at the Waltham International Nutritional Sciences Symposium in Portland, Ore.

But how can that be, you ask? After all, we’ve been studying the dog’s nutritional needs for a hundred years or more now. Why the sudden shift in thinking on something that seems so basic?

The answer is not so simple, but to understand how we might’ve been led astray, it helps to explain the science behind the omnivore “dogma.” To that end, here are three points in favor of the canine-as-omnivore theory:

1. Intestine size. Because meat is relatively easy to digest, the intestinal length of carnivores like cats is relatively short. Plant material is more difficult to break down, so herbivores have much longer intestines. And dogs, like omnivores, fall somewhere in between, with an intestinal length just slightly longer than the cat, so it makes sense that dogs might be classified as omnivorous in this issue.

2. Wolves eat grains too. The story goes that the dog’s wild ancestors ate plenty of grains. It’s said not only that wolves will indulge in the occasional berry but that they’ll binge on grains contained within their prey’s stomach too.

Given these fine points, it makes sense that we might rightly consider a dog an omnivore. But it’s apparently not so cut and dry. Consider Dr. Hendriks’ rebuttal to the above:

1. Coefficient of fermentation. It’s not about intestinal length, says Dr. Hendriks. In fact, when you figure in the wider girth of the feline intestine, the total volume of canine and feline intestines are actually quite similar.

Interestingly, the coefficient of fermentation is similarly low in both dogs and cats.