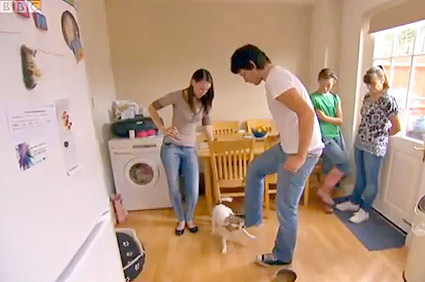 Britain’s best-known dog trainer, Victoria Stillwell, calls it “abusive.” Peter Wederburn, veterinarian and columnist for The Telegraph newspaper, calls it “a disgrace.” There are many Facebook pages devoted to the controversy.

The snarling criticism is over a television segment on the training of a biting Jack Russell Terrier. The clip has become the talk of England, and everyone, it seems, has an opinion. More than anything, dog trainer Jordan Shelley has tapped into the larger controversy over whether any kind of force is acceptable in dog training.

As part of a recurring feature called “Fix My Dog” on The One Show, Shelley was brought in to help a family with a dog who tried to bite anyone who came near her food bowl or anything else she claimed as her own. In what the program called “a battle of wills,” Shelley used his feet to push the dog back from the bowl as she snapped at him, letting her eat only when given permission and forcing her to leave the bowl when told to.

The trainer seems to be fashioning himself as a UK version of Cesar Millan and refers to Millan as "an idol." In this segment with the Jack Russell, the trainer says both "dominance" and "reward" are necessary in training.

The controversy has jumped the pond, with the segment sparking discussion about the merits and dangers of various dog training methods. Though Millan’s methods are less popular in the UK, in the United States the trainer not only has legions of fans, but there are also respected trainers who defend his methods. At the same time, other trainers and veterinary behaviorists push nonstop to have Millan's show taken off the air. With this segment, Jordan Shelley seems to have also become a focus of concern.

As for the Jack Russell? Despite being shown on the show comfortable and relaxed with the family on set, some think the dog is just biding her time to start biting — now without a warning growl. Stillwell told her Facebook fans that she worries that someone in the family will be bitten and has volunteered to retrain the dog “in a humane and beautifully effective way.” She later told her Facebook fans that the BBC had removed Shelley from the program but this change has not been confirmed.

The ongoing debate about what constitutes humane and healthy dog training will continue, but for now we want to know what you think. Is this kind of training abusive? Please tell us what you think in the comments below.