Home ›
Our Pet Experts ›
Linda Lombardi ›
Bedbugs Beware: These Dogs Will Detect You

Bedbugs Beware: These Dogs Will Detect You 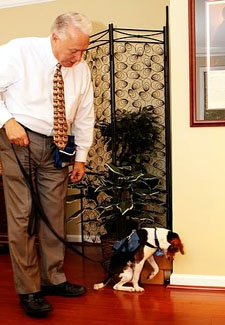 Spending all day looking for bedbugs might sound icky. But don't feel sorry for Roxy or Maggie — they love their job. So does their colleague Marlowe, whose specialty is termites. "I have to stop them sometimes," Steve Dodge says. "It's a passion. They truly love it."

Roxy, Maggie and Marlowe are pest detection sniffer dogs for ProTech Termite and Pest Control in northern Virginia.Now, you may ask yourself, "How does a dog come to love looking for bugs?" Part of it is training, of course, but another important part is starting with the right dog for the job.

The dogs definitely have different personalities, says Dodge, one of ProTech's founders,who has been handling detection dogs for 14 years. "Roxy — you get a camera, she'll stop, turn around, sit down and pose for you. She's a diva," he says. "If you were sitting around with Marlowe when he wasn't working, you'd think, this is not a working dog. He's a cuddling lap dog."

But what they have in common is what's important. "They're dogs that are really made for this," Dodge says. And they're mostly found in shelters, where trainers look for the dogs who would drive the average owner crazy — and who'd be going crazy themselves.

"We make jokes that we want the dog to be bouncing off the walls," Dodge says. "That's the dog we want because that's the dog that's got the drive and wants to work."

When checking out a shelter dog, Dodge will take him outside and play, looking for determination and drive: "How long does he want to chase the toy? If you pretend to throw it and hide it behind your back, how long does he continue to look?"

If a dog seems like a good candidate, an evaluation program tests how he reacts to scents in a series of pipes. "You watch his behavior," Dodge says. "Does he sniff each pipe? Does he have a stick-to-it attitude?"

The final test is a double-blind evaluation, where the human testers don't know where the scent is hidden. Not everyone does this, and Dodge says you can see why it's important from the story of a time when his dog was in a test run being conducted by someone else.

"The guy who was the proctor knew where the hides were, behind a picture on the wall," he says. And when Roxy picked up the scent, he gave it away. "He got excited because no other dog could find the hide," Dodge says. "He started kind of making noises and moving."

To be positive the dog isn't reacting to that kind of cue rather than what he's smelling, Dodge's company will even video the tests so only cameras are in the room with the dog. 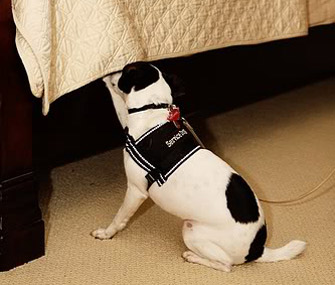 Dodge has his dogs give what's called a passive alert — they sit and put their nose on the source of the odor. He prefers this to a response like barking or scratching. "You might be in a hotel where you don't want the dog to be barking, and I don't want him scratching wallpaper or furniture," he says. "I'd just as soon he sit down quietly."

For the same reason, he prefers to use food rewards rather than a toy reward — a quick snack is more unobtrusive than even a subdued play session.