Home ›
Our Pet Experts ›
Linda Lombardi ›
Before You Rescue That Baby Animal, Make Sure It Needs Your Help

Before You Rescue That Baby Animal, Make Sure It Needs Your Help 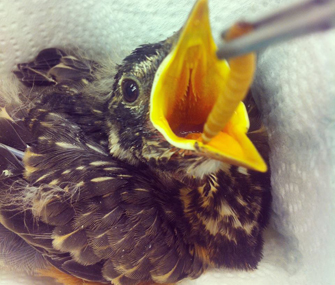 Photo by Alicia DeMay
A rescued baby robin being fed a worm.

For wildlife rehabilitators, spring is the time for orphaned and injured babies. But, as Alicia DeMay learned when she worked at a wildlife center in Virginia, spring can also be the season when well-meaning people show up with rescued baby animals that don't actually need help. "We would get hundreds of baby bunnies — perfectly capable and ready to be on their own, and people would bring them in and we'd just turn around and release them again," she says.

Those situations are the easy ones, for both rehabbers and babies. The bigger problem is when healthy young animals that aren't yet ready to be on their own are "rescued," because even the best rehabilitator is no substitute for mom. Rehabbers can feed them and keep them safe, but they can't teach them how to live in the wild.

Not All Babies Need to Be Rescued

"Mom knows to teach them which trees to go to, where to get the best nuts," says DeMay, who's now clinic director at City Wildlife in Washington, D.C. "Mom knows that stuff. We don't know that stuff." This means that bringing a healthy baby to a wildlife rescue may actually make its chances for survival worse in the long run.

Rehabilitators suggest that before potential rescuers take action, they carefully ascertain if that baby animal really needs help by surveying the surroundings.

When you find a baby animal, you'll often discover that the parents are actually nearby and you're just getting in the way.

"Look around. Do you see a mom squirrel chattering at you? Is a mockingbird dive-bombing you? Those are clear indications that mom is there and you may actually be hindering mom trying to rescue or continue to feed that baby," DeMay says.

The first thing to do is back off and wait. "Unless you see an obvious wound — a broken leg or some kind of bloody wound — the best thing to do is to leave it there and keep an eye on it," DeMay recommends.

Squirrels are probably the most common baby mammals that people encounter. Because they're born with their eyes closed and aren't very mobile, when they've fallen out of their nests and are lying at the base of a tree, they may look injured when they're perfectly fine. Chances are, the mom is going to take care of the situation, as long as you keep your distance. "Mom's not going to come down if there are predators around, and that's what they consider us," DeMay says.

That doesn't mean you can't help, though. "Make sure there are no cats or dogs around, and give mom the space to come down and take the baby back up into the tree."

If you're concerned, most rehab centers will talk you through it on the phone, like one case DeMay recalls of a woman who encountered some babies in a way that was hard to ignore. "We had a lady who was jogging and some squirrels fell out of a tree onto her head," she says. After talking to DeMay, the woman called in to work to say she'd be late and settled down to watch. "She called me hysterically happy about an hour later saying mom had come down and gotten them one at a time and taken them back up into the tree."